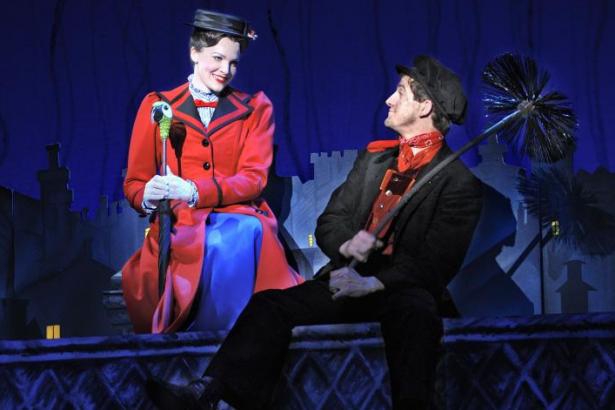 Falling in love with Mary Poppins is easy for Cockney jack-of-all-trades Bert and audiences world-wide.

Who doesn't remember wanting a nanny like Mary Poppins when they were growing up? The magic, the fun, and the love underneath the 'spit spot' sterness all combined to make the classic 1964 Walt Disney movie that starred Dick Van Dyke and won Julie Andrews a Best Actress Academy Award, a hit.

The entire original creative team, including the Academy-Award winning music and lyrics of Richard M. Sherman and Robert B. Sherman, has been reunited and can be seen at Vancouver's Queen Elizabeth Theatre for one week only starting Tuesday, July 17.

A co-production of Disney and Cameron Mackintosh, Mary Poppins opened on Broadway in 2006. Based on P.L. Travers' charming stories and the film, the stage production was created, in collaboration with Cameron Mackintosh, by Academy Award winning screenwriter Julian Fellowes (he won an Academy Award for Best Writing, Original Screenplay for Gosford Park) and the Olivier Award-winning team of George Stiles and Anthony Drewe, who composed new songs and additional music and lyrics.

The musical is the winner of 44 major theatre awards internationally including Tony, Olivier, Helpmann and Evening Standard awards. With four productions running on three continents at this time, Mary Poppins is one of the few hits that has grossed over $644 million and welcomed 9.3 million lovers of the irrepressible nanny who takes charge of the mischievous Bank children introducing them to an imaginary world that becomes real.

Filled with athletic chimney sweeps, sashaying penguins, and merry-go-round animals that detach for races, the play also speaks to a stratified class system, neglectful fathers and husbands who need to learn that their families can offer them more than their unmovable constructs, and the power of imagination and attention that children can thrive under.