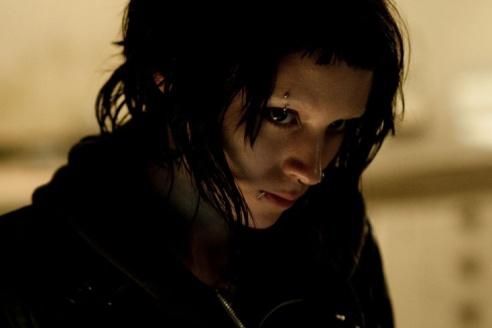 Rooney Mara as an unconvincing Lisbeth Salander in the David Fincher version of "The Girl With the Dragon Tattoo."

Of all the destructive and evil forces that sought to destroy Lisbeth Salander, the heroine of the "The Girl with the Dragon Tattoo", none matched the monster that finally defeated her: The Hollywood rewrite.

The Swedish version of the film, released in 2010, was brilliant on its own.  For lovers of the book by Stieg Larsson, which has sold more than 17 million copies, it was a deeply satisfying adaptation. It both stuck to the story and accurately portrayed the characters visually.

Enter the American version, released last week.  Even the idea of a remake is troubling. Why fix what isn't broken? The Swedish film was so good, the only reason to alter it would be to provide people who can't deal with subtitles a version they can deal with. In other words, to dumb it down: which is exactly what director David Fincher (The Social Network) has done. He's taken a film of great depth and suspense and turned it into a film of little depth and suspense.

The film wasn't broken, so why did Fincher feel he had to fix it?

Missing from the new version are all the troubled, aged faces of the old generation of Swedish power brokers, their psychic turmoil illuminated by scenes in which the camera focused on their faces, quietly, allowing the viewer inside them. Altered in this version is the absolute purity of Lisbeth Salander, the anti-social genius hacker, whose sense of justice is absolute, whose morality (while disturbed) is utterly clear, and who is true to novel in every scene of the brilliantly executed original.

Rooney Mara plays Fincher's Salander. It starts with her blonde eyebrows, a touch that instantly separates this Salander from the original Salander, whose eyebrows were dark and arched. Mara's helmet of black hair looks like a wig, and paired with these pale eyebrows, it implied to me that underneath her aggressive Goth exterior is a delicate, sweet and blonde creature, vulnerable, shy and weak. The real  her (gag).

A movie critic friend once told me that strong Hollywood heroines must either be killed off in movies, destroyed psychologically, or else they must marry.

In the excellent original Swedish film based on Steig Larsson's exceptional crime trilogy "Millenium", Salander's one tough little bitch. Nothing's going to destroy her and nobody's going to marry her. Those who attack her will eventually pay for it.  She's been hurt, yes, but the experience hasn't made her passive. She's as violent as her enemies, but driven by a powerful moral code. She has integrity. Her victims are slimeballs, liars, rapists, sickos. Her violence is in self-defence.

Protagonist Mikael Blomkvist, played beautifully by Michael Nykvist, is a journalist, publisher and part-owner of the monthly magazine Millenium. He trusts Salander even after he learns of her disturbed background, her diagnosis as criminally insane and her incarceration by the Swedish state.   Ultimately, she'll save his life, and in later parts of the triology of films, he'll save hers. They're linked by events and towering integrity. 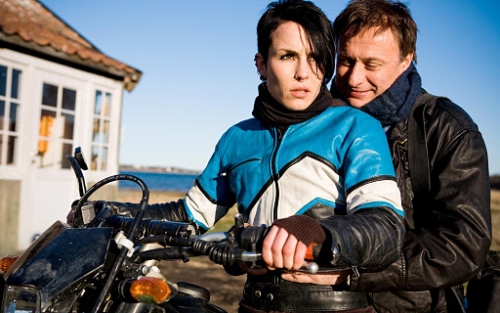 Noomi Rapace and Michael Blomkvist (pictured above in original "The Girl With the Dragon Tattoo"), one hot couple. Romantic. Not romanticized.

Salander, portrayed unforgettably by Noomi Rapace is a freelance surveillance agent and researcher, specializing in investigating people on behalf of Milton Security. In the first scene of the film, she's called in to Milton Security to talk to a client and it immediately becomes clear that she's valued by her employer but that she's antisocial, possibly autistic.

As the film progresses, it's clear that Salander is a disturbed and disturbing monster-killer who is smarter than everyone around her. With jet black spiked hair (and dark eyebrows) and sharp punk bling, Rapace does a brilliant job of staying true to Larsson's unflinchingly pure and powerful Salander.

Even when Salander is helpless, she doesn't bend. Neither the sadist doctor who molests her repeatedly, nor the "guardian" who rapes her, manage to break her body or her destroy her soul.

Below, Salander's rapist in the original film. Believable, real, sadist. The guy next door. Salander gives him a fitting punishment. 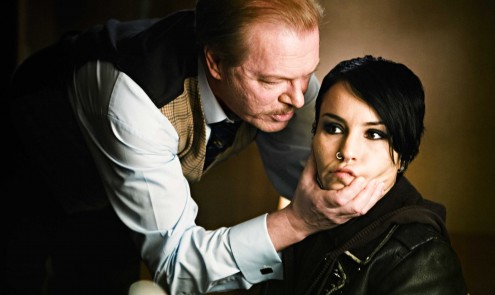 Now America has its hands on Salander.

I wasn't certain if I was just having a hard time adjusting to the new Salander or if she really was being toned down until, during the film's most terrifying moment -- which is also Salander's most valiant moment -- the Hollywood version has Salander asking Blomkvist for permission to perform an act which, in the original, she coolly executed and admitted to him after the fact. He disapproved. It was too late. She isn't really bothered by whether he approves or not, and shows no signs ever of questioning herself.

Mara, in the American version below: unconvincing and frail-looking. Give me a break.

In the U.S. version, at the most crucial moment, rather than killing the sicko herself, she passively watches him die. Weak.

The Swedish title of "Girl With the Dragon Tattoo" is "Men who Hate Women".  That sums up the problem of both the plot of the Swedish film and the rewrite. Salander's courage,  in Fincher's hands, is undermined.  Her brilliance and morality are sublimated to Blomkvist, made more powerful by the Hollywood director. In the original, they're equals, although she is the more brutal of the two.

In the American version, Blomkvist, played by Daniel Craig, is drab as an Ohio strip mall.  He lacks Nykvist's  pockmarked face, off-kilter nose, and classic un-handsomeness which, rather than detracting from a potent sexiness and strength, increases his power on the screen.  In the Swedish version, Blomkvist doesn't get to order Salander around: no one tells her what to do, but in the American version, he dominates. Disappointing.

If you go to see the new release anyway, just know that you're going to meet a cast of watered-down characters, an inferior script, and a Salander who, if you liked the first one, you may actually hate.

Oh, I get it: the remake's all about getting this beautiful pierced girl naked  in the poster below. Craig, of course, has all his clothes on. Sigh.

Will they scrap the sequels or go on with this debacle?

But one thing's certain, this  time Lisbeth Salander didn't come out on top.