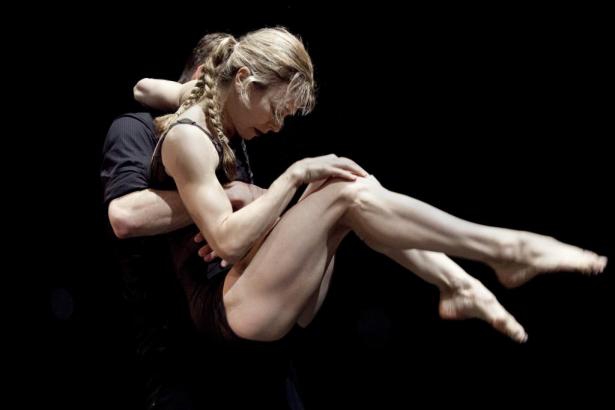 Louise Lecavalier in A Few Minutes of Lock

In the same way the camera loves movie stars, the stage loves contemporary dance icon Louise Lecavalier. Just try to take your eyes off her. Brought to us by DanceHouse, the first piece of the evening is Children, a Nigel Charnock commission danced by Lecavalier and Patrick Lamothe. Alone at first under effective strobe lighting, Lecavalier wears a simple black tank and slacks and launches herself across the stage like four-legged animal. Her hunger for movement is palpable, as is her devotion to each danced moment. Not only is her powerful physicality beautiful, so is she—sharp bone structure, a long mess of blond hair, and soft eyes. She is riveting.

Children is classic Charnock: epic, episodic, extremely physical, and scored with songs that vary from Leonard Cohen to Billie Holiday to Puccini. Charnock delves into his theme that we are all children from every angle, especially when Lamothe appears. The duets are playful or competitive with pillow fights, water bottle wars, flashlight solos, and emotional moments of affection. It never gets too literal; the vocabulary is grounded in Charnock’s robust contemporary movement.

Prop-dependent pieces can be hard to pull off choreographically, but in this case, it works. Highlights include a section of stylized stick fighting drills, where Lecavalier is so fast, compact, and adept at the handwork required to manipulate the metal pole, that after seeing it once, you wish you could press rewind to see it again.

The ending is a standout. Having doused themselves with water until sopping wet, Lamothe dies and Lecavalier grieves, trying to bring him back to life. As Lamothe returns to life, Lecavalier dies, leaving Lamothe to try to bring her back. As the piece winds down, he lifts her high in his arms under a pool of light, and she returns to life, as they slowly rotate in an embrace. It’s a powerful and beautiful conclusion, illustrating a human need to be loved, and to matter to someone else.

After a five-minute break for mop up, costume change and a little hair braiding, we are treated to A Few Minutes of Lock, excerpts from Édouard Lock’s 2 (premiered in 1995) and Salt (premiered in 1998), the last two pieces Lecavalier starred in during her 18 years with La La La Human Steps. As soon as the lights come up and the Iggy Pop score plays, the audience is dumbstruck. The reasons are too many to count: sophisticated choreography, exquisite partnering work, inventive lifts, holds, flips, spins, and the gestural work Lock made famous, borrowed by a million choreographers after him.

Keir Knight joins Lecavalier, looking tall and gorgeous. He is a silent accomplice, so accomplished a partner that the manipulations and holds and catches look effortless, when they’re anything but. Lecavalier is simply stunning in this work. Well over a decade later, she is just as explosive and powerful in Lock’s choreography, a dare devil who attacks revolution on the vertical and horizontal planes like no other dancer. Her trademark horizontal flips are still gravity defying, almost too fast to fully register. She and her partners (Patrick joins them for a section) dance entirely in the moment, like they’re doing the movements for the first time, yet the execution is incredibly clean, like the dance is in their blood. To see Lecavalier dance choreography from the creator and company she will be forever linked to is both a privilege and a gift.

A standing ovation and two curtain calls later, she dances a short encore with her partners. Still on their feet, the audience watches enthralled. A short, charming trio ensues, and when the dancers finally collapse on top of each other, the lights snap to black and the crowd erupts again. We have loved every second.