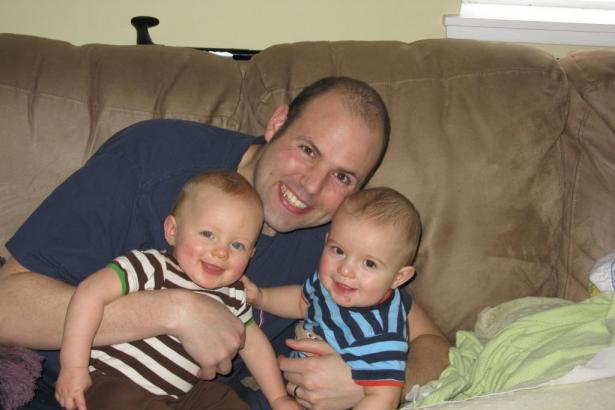 When VO food blogger Scott Graham found out that his friend Andrew needed $7,000 for medical treatment, he set off to do what he's good at doing: fundraising. But unlike raising money for famous charities, Graham had to raise money for just one man who was a complete stranger to the rest of the world.

"Fundraising for an individual is a whole different animal," said Graham. "No one knows who Andrew is, so it's my job to get his cause out into the community and create the same emotional connection that I have with Andrew with strangers."

Using his blog, What's For Lunch BC as a platform, Graham spread the word: 32-year-old Andrew Kristoff was an old friend, a father of twin boys and former electrician who was diagnosed with Multiple Sclerosis. The disease progressed to the point that Andrew is now forced to use a wheelchair to get around. In order to work again and enjoy his fatherhood, Kristoff would have to go to Seattle for an innovative, hard-to-receive procedure called the Liberation Treatment which has helped MS patients walk again -- the trouble is, Canadian health care won't fund it, so he desperately needed to raise the money.

Graham and his friends came up with Andrewpalooza, an evening with local musicians Behind Sapphire, Bodhi Jones, Nadia Von Hahn and Sweetheart, with comedy standup by local comedians like Ryan Mutuma, Al Hassam, Ruven, Goldie Hoffman and Chris Gaskin to bring on the laughter at the event. Carmen Cruz is emceeing the event, while The Red Room Ultrabar on Richards Street offered to provide the venue for the event.

Remarkably, most of them had never even heard of Andrew before they signed on to the project.

"The performers, the venue and I are all doing this for free as we believe that good karma is payment enough," said Graham. "Myself and the owner of the Red Room are the only ones who know Andrew, everyone else is doing this event out of a belief that we can make a difference in one man's life while bring attention to the bigger issue."

So why was Graham moved to go take on this fundraising project for his friend?

"Andrew can be a beacon for those suffering with MS that a better life is just over the horizon," he said, referring to the estimated 8,000 people living with Multiple Sclerosis in B.C. He is also motivated by Kristoff's zest for life which, despite his lack of mobility, affected the people around him.

"One of my fondest memories, not just of Andrew but but from my entire life, was on a cruise for a friends wedding in 2007," Graham explained. "Andrew wanted to go down the water slide, so a few friends and I carried him up the stairs and fired him down the slide."

"His smile was totally worth it."

If you’re on Twitter use the hashtag #DoItForAndy or #AndrewPalooza for all Andrew Palooza related tweets. You can follow the event @AndrewPalooza.

Please buy a ticket, invite your friends to do the same and come have a great night with amazing local music and good people.