Fiddler on the Roof comes to The Centre in Vancouver 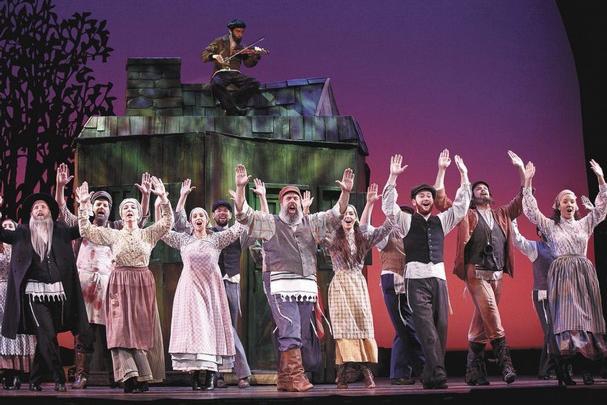 Fiddler on the Roof, Joseph Stein's timeless classic of American musical theatre, opened at the Centre for the Performing Arts on Friday.

The lights went up to The Fiddler (Jason Garrison) on the roof as Tevye (John Preece) and the core players performed the iconic song, "Tradition".

One by one, hits like "Matchmaker Matchmaker", "If I Were a Rich Man" and "Sunrise, Sunset" had much of the audience singing and moving in their seats in time to the music.

The creative scenic design by Steve Gilliam gave an earthy believability to the action on stage. Large silhouette rooftops and trees slid in and out from the wings and overhead, indicating the changing seasons and balancing the three-dimensional foreground.

John Preece brought the starring role of Tevye to life through song and a gentle likeability that made him relatable and sympathetic. The enormity of the role was evident, with Preece's character listed in almost every scene.

During the intermission, the excitement was palpable, with many audience members talking about their favourite scenes.

Once the second part of the show began, actors lit up the stage again with duets of "Now I Have Everything" and "Do You Love Me".

Nancy Evans played Tevyye's wife, Golde, moving easily from scene to scene and bringing believability and a great sense of timing to the dialogue.

Although she nailed the acting, her singing felt a little jarring. Evans' voice seemed shaky and strained, which is unusual, given the list of musical accomplishments behind her name. It may have had something to do with technical problems with the microphone, which caused audiences to lean in frequently to catch her barely-audible words.

The whole company participated in the "Bottle Dance" and the "Wedding Dance", clearly the highlight performances of the show.

Though Sammy Dallas Bayes reproduced the original choreography of Jerome Robbins, it was no small feat to bring that to a new stage design, venue, props and cast.

Fiddler on the Roof is a grand mix of music, drama, comedy, dance, and romance. And the performance at The Centre did justice to a timeless classic.