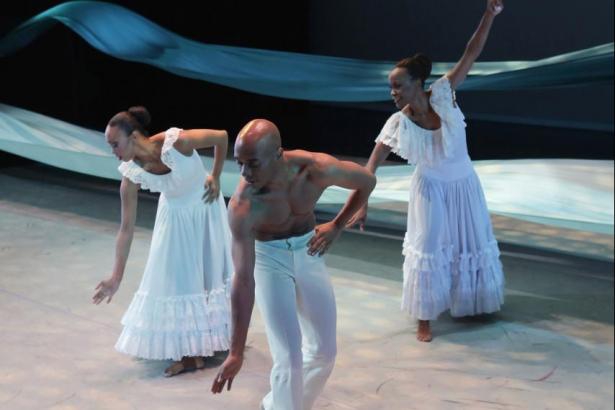 Like other modern dance companies whose founder’s repertoire exist as an archival representation, the Alvin Ailey American Dance Theater has wholly succeeded in bringing Ailey’s name into the 21st century while ensuring their longevity with stellar commissioned works for the future. Ballet BC hit a homerun presenting Alvin Ailey American Dance Theatre after a 20-year Vancouver hiatus. This was demonstrated by the well-deserved standing ovation after an individual piece by artistic director-designate Robert Battle, "The Hunt", and at the end. Judith Jamison, Ailey’s muse from 1965 to 1980, who succeeded Ailey after his untimely death from AIDS at the age of 58, is stepping down. Battle will assuredly lead this alive, breathing entity of important and meaningful  dance to great heights.

Memoria is a tribute to Ailey’s friend and co-choreographer Joyce Trisler, choreographed on the year of her death in 1979. Both trained with Lester Horton, the Cailfornian dance pioneer, and this tribute, lovingly set to music by jazz acoustic pianist and composer Keith Jarrett, showcases Ailey’s use of the idioms that fed his work.

Jazz styles circa 60s/70s, modern dance techniques like Graham and Horton, and African are overlaid on bodies well trained in ballet. The styles flow in and out of each seamlessly reminiscent of choreographers who’ve clearly been influenced by him like Bill T Jones and even Doug Elkin and Friends who Vancouver audiences saw this February as part of the Dancehouse series.

The difference is that Ailey did it first and did it organically through a visceral passion. He used the technique that best suited his intentions so that it all seemed right.

It was satisfying to see modern dance as opposed to the “contemperary’” genre that is so prevalent today due to mass marketing on shows like So You Think You Can Dance. Going back to your roots is important and when done this well, a true joy.

Cry, originally choreographed on Judith Jamison, was danced by three dancers Canadian Rachel McLaren, Constance Stamatiou and Briana Reed. Using  three pieces of music  – Alice Coltrane, Laura Nyro and Chuck Griffin --for  the three solos that both place the dance in a time period yet remain timeless because of their excellence, the dancers expressed the pain, hardship and joy of being a woman. The program notes said “For all Black women everywhere -- especially our mothers” but within that specificity is the universal. 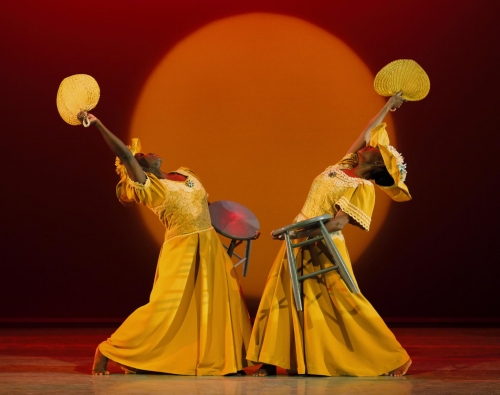 The final piece of the program Revelations is turning 50 this year, yet remains as crowd-pleasing and important as when it was first created. Revelations is historically seminal, as it’s the first dance created about African American culture in the south that had been viewed and celebrated by mainstream culture. A film by Judy Kinberg with footage of Ailey speaking and Jamison offering her perceptions set up the piece well. Built around Ailey’s “blood memories”  about growing up in rural Texas during the Depression, he used traditional spirituals to evoke the baptisms, church ladies and the men that built those communities bringing that world, full of joy and human frailty, to our attention.

It was Battle’s The Hunt, choreographed for six bare chested men in high waisted and voluminous black skirts with flashes of red on the inside, that sent the audience into a frenzy. With pulsing percussion by Les Tambours du Bronx driving the men onwards to a delirium of movement that left nothing unsaid, it was simply superb. Like Pina Bausch’s Rite of Spring, the dancers were driven by a life force that told the story of life, death, sexual release and the basest of drives: to hunt, to conquer and to share. A comment heard in the intermission summed up the experience most eloquently, “My nipples are still hard.”

The dancers were simply flawless. Beautifully trained and able to express their inner vision with an abandon and honest strength rarely seen, they honoured the work making it alive.