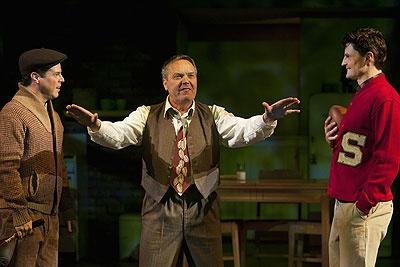 Scene from Death of a Salesman, photo from vancouverplayhouse.com

Arthur Miller’s Death of a Salesman takes audiences on a journey bred from the American Dream and the lies that its believers tell themselves.  John Cooper, director of the Vancouver Playhouse production running through this weekend, pulls forth performances that maintain the power of the classic play.

Premiered in 1949 with Lee J. Cobb as Willie Loman, the quintessential salesman, Death of a Salesman has won the Pulitzer Prize, numerous Tony’s for the original and the revivals, Drama Desk Awards and New York Drama Circle Critic’s Choice Awards. Playing Willie Loman is one of those parts that mature male actors revel in. Having seen Dustin Hoffman in the part on Broadway in 1984, I found that this Death of a Salesman seems to have a slightly different focus.

Tom McBeath’s Willie Loman just won’t give up. He maintains his fantasy that eldest son Biff (Bob Frazer) is a superstar, and puts youngest son Happy (Kevin K. James) in the position of always vying for approval. Not accepting that he is slipping into senile dementia, he is a liability to his company. When the house of cards collapses, he perceives no solution but suicide.

McBeath played the denial brilliantly, but the darkness underneath that leads to Loman’s ultimate suicide did not read as well. Perhaps it was an off-night, but the audience didn't get to see Willie Loman’s enormous realization that he was a completely and utterly defeated man. That is the tragedy of this epic character.

It was Linda (Donna Bellville) that the play seemed to revolve around instead of Willie. Linda’s love for her husband is palpable, even to the exclusion of her sons who ultimately disappoint her. It is Linda’s unconditional love -- and that’s love in capital letters -- that takes his abuse, his lying, his betrayal and his inability to provide for his family in the end. Her strength and compassion was played with such mastery by Belleville that the play revolved around her, the only character that told the truth.

Frazer does a fine job, especially in the second act, when his emotional realization and need to tell his father his truth overrides the family narrative. James’ Happy is also excellent, leading the audience to understand the character’s motivations and his weaknesses. It's understood that unless a major “aha” moment happens, which is unlikely, Hap will become another Willie Loman and perpetuate the underside of the American Dream.

The psychology of the family dynamic is crystal clear: Why does Biff steal things from his employers, thus sabotaging his chances of greatness? Why does Happy continue to philander, showing the undercurrent of misogyny that started with observing his father’s treatment of his mother? Why does wife Linda (Donna Belleville) put up with the abuse and infidelity? Director Cooper and the uniformly talented cast has answered all these questions and more.

All the supporting players from Daniel Arnold’s Bernard to Eric Keenleyside (Charley) and even Stanley, the waiter, (Jameson Parker) provided nuanced performances that supported the themes.

Set Designer Pam Johnson has created a deconstructed house surrounded by tall buildings that create the metaphor of Willie’s demise. He can’t plant his garden for the future because there is not enough light. The claustrophobia of the little house brilliantly mirrors his lies closing in.