Fearless dancers tear up the stage at Chutzpah! 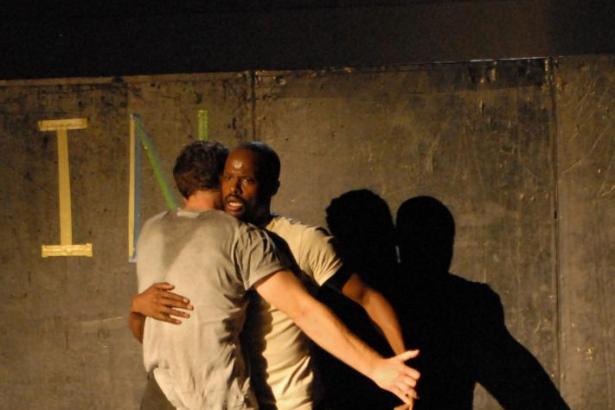 Choreographers/performers Kevin O’Day, Luches Huddleston, Jr., and Robert Glumbeck, and choreographer Roberto Campanella have created a piece that speaks to a voice never heard from in dance: the over–forty male dancer. Full Bloom, inspired by the Bette Davis quote: “Getting old is not for sissies,” resonates for those in that demographic and for a younger set who can appreciate the artistry of mature dance artists who can still dance their asses off.

Full Bloom covered themes like the external power suit that hides the internal emotion that men are not allowed to display, the father/son relationship, the brother-to-brother relationship, the new father anxiety and joy, putting to rest the party boy, multi-tasking with your kids’ toys, looking at mortality in the face, the disintegration of the body, middle-aged sex, the soldier’s journey, the ritual daily shit, shower and shave and most importantly, how there is great strength for men  in softness, empathy and caring.

It takes great courage to head out the door in the morning to be all that you can be and these men told us their stories with humour, truth and artistry.

Beautifully choreographed with a movement vocabulary that combined  tricky technical displays and a joy in movement that was tangible, these are three masters. All three are big men whose landings were so soft and whose transitions morphed through dynamic sharpness to soft release so effortlessly, that the audience journeyed with them  reveling in their message.

Hard to pick standout sections as the entire piece was so beautifully rehearsed with each moment filled with meaning, but O’Day’s improvised dance to Neil Young’s Old Man was particularily poignant. Extremely personal and almost irrelevant that the audience was watching, it was a glimpse into one man’s aging  expectations that became universal to all men as his own journey was so specific and transparent.

Though Huddleston Jr. is a gorgeous dancer, his speaking about his body not being what it used to be while slumped on the partial wall upstage with the word "IN" written on it, resounded strongly --  especially for those of us feeling exactly the same way.

Glumbeck’s solo War-What is it Good for spoke to the martial American spirit and indeed to all men who fight our wars at huge sacrifice to themselves, their families and their countries.

Using music that ranged from Mozart and Steve Reich to Otis Redding, all the choices were appropriate and fulfilled their mandate of filling up their souls with dance in order to communicate their inner vision.

The first half of the show was the untitled world premiere of a work choreographed by Chutzpah Israeli artists  in residence Yossi Berg and Oded Berg and Vancouver’s own Justine Chambers and Noam Gagnon, who were the Chutzpah’s local artists in residence.

In a two-month collaborative rehearsal period, the four created a work that dealt with speaking their own truths. Starting with French disco drummer Cerrone’s driving beat with the four standing at the edge of the right side of the stage, they spoke the lyric’s chorus and gradually became more amplified. Personal pain and sticking together to cope was the order of this piece.

Movement phrases as solos, duets, trios and group relied on the strength of the performers. Chambers, the only woman, is a great dancer whose fearless physicality is a joy to watch: her falls into the floor and recoveries are seamless. Her listing of the events that have pained her, spoken into a microphone that traveled around Oded Graf’s body turning his body into a jungle gym for Chambers, was a highpoint.

Ending with a pained solo by Noam Gagnon to Kanye West in an ode to his assholish behavior to Taylor Swift at the 2009 MTV Video Music Awards, the music was an apology of sorts and Gagnon’s dance was anything but. Danced in stilettos and not much else, it was an external embodiment of pain. Hard to watch at times, it was also fascinating, like watching a train wreck.

Check out the matinee today at 2:00pm: Sunday Feb. 27 at the Norman Rothstein Theatre.