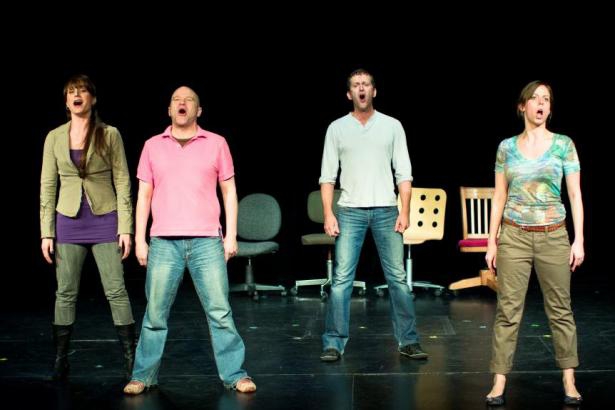 If Seinfeld could achieve extraordinary success with a show about nothing, than [title of show], a charming musical running at the Revue stage of the Arts Club at Granville Island, can also fly with a musical about making a musical. Directed by Mike Mackenzie, this four hander, plus musical director Stewart Yu, onstage and part of the fun, runs till February 26 and should be included in your entertainment day timer.

Premiered in 2004 at the New York Musical Theatre Festival with music and lyrics by Jeff Bowen and book by Hunter Bell, [title of show] ran off-Broadway and then Broadway, and won writers/stars Bowen and Bell, as well as director Michael Berresse,  Obie Awards.  Bell was also nominated for a Tony Award for Best Book of a Musical.

Gloriously self-referential, the show opens with Jeff (Shawn Macdonald) and Hunter (Greg Armstrong-Morris), gay friends, deciding that writing a musical in three and a half weeks for the Musical Theatre Festival will inspire them to push beyond their temp/catering jobs, and tv watching marathons. Enlisting Susan (Meghan Gardiner), whose corporate whore gig is wearing her down, and Heidi (Lauren Bowler), the superstar of the group as she continues to audition and sometimes gets the chorus/understudy/ swing/ dance captain part in Broadway musicals, they begin.

The play within a play conceit and the occasional in musical theatre joke allow the cast to play within Mackenzie’s clever direction. All four have fantastic voices and Yu has created harmonies that they all hit with aplomb.  Bowler, in particular nails a beautiful song at the end: “A Way Back to Then”, worth the price of admission.

Choreography by Sara-Jean Hosie and Shane Snow was a tad hit and miss with rather old fashioned classroom steps being used without tongue in cheek winks though the transitions in “Awkward Photo Shoot” were exceedingly creative.

The cast seemed to lack a bit of energy as the night was stormy with slush falling from the sky, and the house was ridiculously small.  Armstrong Morris’  sure handed enthusiasm pulled us along with Gardiner’s dry wit alongside and by the second half, the one act ninety minute show hit its stride.

Four people, four mismatched chairs, a director, a musical director, a choreographer and a stage manager are what are required of this show, ensuring its continued success at small theatres all across the country.

Now come on, Vancouver, forget the weather and enjoy a totally fun evening of theatre with great voices, solid acting and many laughs!