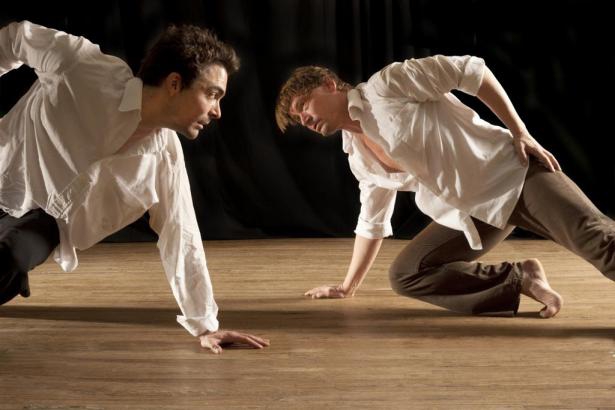 Set designer Jay Gower-Taylor creates an intimate, outdoor, and strangely private environment.  Countless antique wooden chairs are placed in a circle around a large playing area. Portable and stationary industrial work lights are focused on the stage. The audience enters and is seated in the wooden chairs, front row witnesses to an imagined excavation site. Two archaeologists measure, brush away soil, and write notes in their careful search for Lorca’s remains.

The archaeologists soon morph into The Poet and The Murderer, played with intensity by Dan Wild and Billy Marchenski, respectively.  Equally matched in passion, commitment and theatrical prowess, these performers are highly skilled in both the delivery of text and the execution of movement. Structured mainly as two parallel monologues that do not interact, it is Wild and Marchenski’s physical connections, oddly enough, that are the most compelling. At times the men wrestle for power, pushing and pulling each other in a brawl of dominance and submission. At other times sexuality is in the air; as a struggle, a vulnerability, and most seriously, a liability. The Murderer thinks of The Poet as a “faggot” and the word, repeated often, cuts like a weapon. Bennathan’s script adeptly creates an environment where words are powerful, and also dangerous; where in the discovery of language and specifically poetry, anything can happen.

James Proudfoot offers a richly layered lighting design. The performers are sometimes lit with harsh work lights, or they themselves manoeuvre hand held task lights, illuminating a scene in slashes of light. There are also softer lighting looks reminiscent of the glowing ambers of a setting sun, and times where a delicate starry night sky shines down on the playing area. The combination of industrial and organic lighting looks adds a tremendous depth to the performance as a whole.

I have just one quibble. Over the course of the evening, the self-reflective, parallel monologue structure becomes a little worn. The Poet and The Murderer deliver many passages of text over each other and at each other, but they do not seem to talk to each other, or to listen. Perhaps this is the point. In language, words and poetry, these men cannot hear each other, and it is only through their physical connections that an actual conversation takes place. The brutality, passion and urgency of Marchenski and Wild’s movements together are powerful and authentic.  I wanted to feel the same way about the text. I wanted more dialogue, and less monologue. I wanted more quiet and personal truth shared between characters, and less theatrical grandiosity.

The piece leaves me with many questions; for one, the motive behind Lorca’s murder. Bennathan does not have the answer; in actuality no one does, although the theories are many. He does wonder, however, if the reasons behind the murder are more complex than we can ever know.  The mystery keeps us engaged in this unique performance, along with the power of Lorca’s poetry, the careful crafting of the mise en scène and the strength of play’s performers.