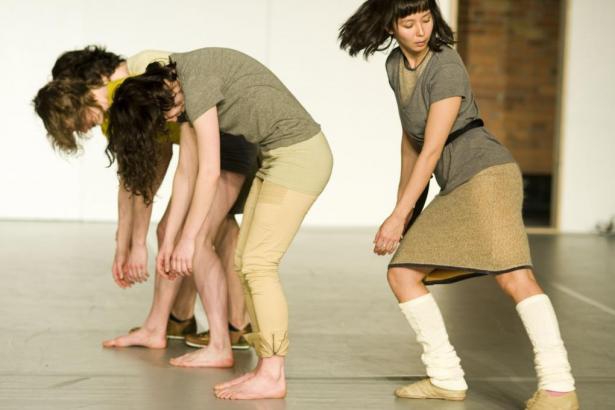 Ame Henderson/Public Recording’s Relay is an interesting theatrical experiment. Presently on tour across Canada, this Toronto company intrigues the Vancouver audience with a performance based purely on memories of past performances. The audience is first ushered onto the stage. A long wooden table is centred, surrounded by chairs and the table’s surface is littered with found objects and vintage sound equipment. The eight performers are strewn throughout the audience and for the first fifteen minutes we stand and observe the performers moving slowly in small gestures with their eyes closed.

After a while we are led to the seats in the house and the observation continues. The found objects and equipment have been moved to the sides of the stage. The light-coloured floor is surrounded by white panels on three sides, with a u-shaped panel suspended from the ceiling. The effect is that of a light box.

The piece has four sections with a physical “event” within each section. The sections are punctuated by four set changes, where the cast collectively moves the table and chairs to a new configuration. The performance is movement based. Costumes consist of bohemian street clothes in shades of gold, cream and brown. The lighting design feels coincidental. Sometimes the lights get dim, sometimes the lights get bright, sometimes an area is isolated, sometimes there are silhouettes. There doesn’t seem to be any more to it than that. The overall feeling is very matter of fact, and it’s a little underwhelming.

The vocabulary is sparse, and decidedly non-dancerly. A performer has a memory of a past performance. He then physicalizes the memory on stage. The first memory is a double arm circle. One by one, each subsequent performer attempts to meet that memory in its fullest potential.  The performers attempt to arrive at a sense of unity or unison.  Sometimes it works, sometimes it doesn’t. It’s interesting either way. The performers constantly look at each other for movement cues. Eyes constantly scanning the playing area, they seem alive, grounded and open, all their senses at the ready.  It’s occasionally fascinating to watch, and probably exhausting to perform. Unfortunately, at times it also looks contrived. This relaying of information is repeated again and again in mainly a movement capacity, but also occasionally through spoken word. Almost all at once the performers will speak loudly, attempting to find a memory of spoken content, gesture and intonation. The cacophony provides needed lighter moments over the performance, and are an effective break from the rather cool atmosphere.

The music is wonderful, and it’s one of the strongest elements of the evening. The recorded compositions are gentle, wistful and melodic. In addition to this, a musician continuously wanders from one “sound station” stage right to another “sound station” stage left composing live, creating sounds, loops and samples by placing microphones in glass jars, or on top of aluminum pie plates to manipulate sounds as they emerge from his equipment.

There is ample time to consider the humanity on stage. Watching every performer so carefully, it’s easy to enjoy their individual charms, strengths and approaches to the work. Sitting in the audience I feel curious – but do I feel a connection? As the piece winds down after ninety minutes of “relaying”, I long for a deeper understanding, either in terms of the individuality of the people on stage, or for their ongoing task of discovering unison. Although carefully created, and performed with integrity, intrigue and intellect, I wonder if the experience of performing the piece is perhaps more satisfying than watching it. Sadly, it’s hard to really care. In the end, Relay is what it is, no more and no less.