In Experiments-Where Emotion and Logic Collide, a three year collaboration comes to fruition 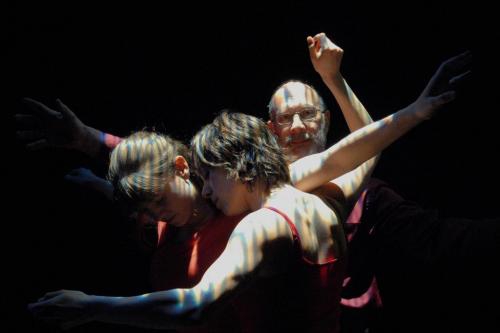 Viewing a process-heavy collaboration’s product is always an interesting prospect. Sometimes the product is not as important to the creators as the making of it. In Experiments-Where Emotion and Logic Collide, produced by the LINK Dance Foundation in partnership with Simon Fraser University’s Centre for Dialolgue and The Dance Centre, one can imagine that the three day run was a culmination but not necessarily the most enriching part of the process.

Artistic Director of LINK Dance Foundation, Gail Lotenberg teamed up with behavioral ecologists Dr. Larry Dill, who performed live, and  Dr. Lee Gass, Dr. Anne Solomon, and Dr. Mark Winston, present  in video projection, working on the piece for 3 years. Four dancers including Lotenberg, Darcy McMurray, Cara Siu, and Marvin Vergara fulfilled choreographer Lotenberg’s vision while collaborating together for a year. Gass' lovely sculpture was featured on the walls with one three dimensional piece was placed in the lobby.

Opening with circles on a grid in projection on the backstage scrim, a solo Lutenberg led us through a series of movement/gesture scores that used a heavy dose of clowning. A smaller flashlight was used to shine out to the audience breaking down the fourth wall and including us in the experiment, a fact that was confirmed when at the end of act one, Dill showed the audience a video of our reaction to a bright light  that was a documentation of our fear reaction. Using a laser pointer, he picked out people whose reactions were notable making us lab rats for the evening.

The rest of act one saw vignettes that showcased various dancers, not so much moving through space, but either manipulating props like giant styrofoam cubes and smaller, colourfully lit from within cubes or sequences that were more gestural. Once again, clowning techniques were used to make the non-verbal interaction with the props and each other obvious.

A highlight was the section with Dill sitting on a chair describing the movement sequences of Vergara, though when Dill got up to recreate the movement, a more indepth and longer sequence would have been appreciated. Seeing the highly articulated body of the dancer and then the body of the scientist deal with the same material was an interesting statement and one of the few times that the dance and the science actually integrated.

The large projection of Gass, telling the story of his hummingbird research, was also riveting. That age old delight in storytelling, especially on a subject that is so passionate to the teller but that most of the audience knew little about, harkened back to that same ancient tradition of hunkering down around the fire to hear a story. Gass’ warmth and love of his subject shone.

The second act was more straight forward dance featuring the excellence of the dancers with the partnering sequences being of more interest than the phrases of movement.

A video sequence with Solomon speaking of her fascination of the life under water had a beautiful sequence where her hands paralleled the hands of dancer McMurray who was lit in a spot upstage left. More sequences of interaction between the projections and the performers would have been welcome.

The projections were used more as a backdrop rather than as an investigation into the interaction between the mediums. Beautifully realized by projection designers Sammy and Shang-Han Chien, they did provide a moving context as did John carter's lighting.

The only time that the title: Where Emotion and Logic Collide was referred to directly was in the projection of Gass talking about the revelation about his research that would change his career and life. This thesis was also supported during a segment when Dill used the dancers as illustration. More like a lecture rather than a visceral experience, perhaps a more creative approach that allowed the audience to feel and perhaps be manipulated into thinking would have had more of an effect.

In Solomon’s video projection she spoke of how we are connected; how deeply and how profoundly. In this work, we didn’t get to answer those questions but rather how science and dance are juxtaposed. Perhaps in another three years, these collaborators can get to the deep and the profound.