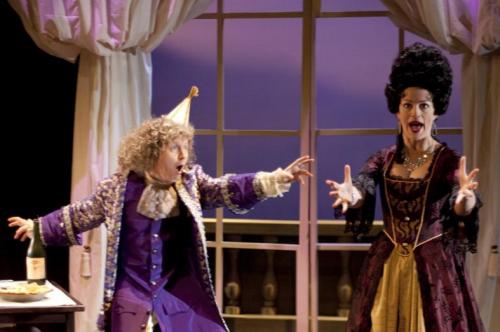 Celebrating its 35th year, no small accomplishment, Touchstone Theatre’s artistic director Katrina Dunn has chosen musical theatre or music theatre for its season. Opening with Mimi or a Poisoner’s Comedy, first produced by Toronto’s Taragon Theatre, ensures that their mandate of all Canadian content is fulfilled.

The play was created by Allen Cole (music & lyrics), Melody A. Johnson (book & lyrics) and Rick Roberts (book and lyrics). Clearly the three are Sondheim fans, taking the true story of Marie-Madelaine-Marguerite d’Aubray, a French serial killer in the 17th century, and turning it into a Sweeney Todd dopelganger complete with a stylish period, lovers working as murderers and pies.

The curtain at the Firehall opens with musical director Steven Greenfield sitting at a grand piano leading off four actors romping lasciviously on a pink pouf of a bed. Mimi (Jennifer Lines), her husband Brinny (Sanders Whiting), Mimi’s lover Godin de Sainte-Croix (Peter Jorgensen) and maid Francoise (Linda Quibell) are athletically decadent in their ministrations establishing the over the top fun that Dunn has chosen for the interpretation of the script.

Mimi’s father d'Aubray (Donald Adams) wants her carnal cavorting replaced with emulation of her deceased saintly mother or she will be cut off from the family fortune. Sainte-Croix is sent away in hopes of keeping him away from Mimi. Spending time in the gaol with the Italian murdering optimist Exili (Greg Armstrong-Morris), Exili teaches him how poison conveniently solves problems. Saint-Croixe is released and introduces the handy solution of poison in the pigeon pie to Mimi, et voila, daddy’s dead and Mimi inherits his fortune.

In Act 2, the detective Desgrais (Donald Adams) solves the mystery of the multiple deaths by poison, which has spread over Paris so vociferously that people aren’t eating. Mimi is caught, her head is lopped off, and a vibraphone is wheeled on for three notes at the end. It's not unlike the fairy tale characters in Sondheim’s Into the Woods who have to wait around for 2½ hours in the dressing room to come on for the last 3 minutes of the show.

This production boils everything it can out of a play whose broth is a tad thin.

The designers create Louis XIV’s world accurately, beautifully and cleverly. David Robert’s set design, especially the furniture that links together to create different pieces, creates the froth of the era while dealing with the realities of a play that had to move from the Shadbolt Centre for the Arts to the Firehall Arts Centre.

Costumes by Farnaz Khaki-Sadigh are historically correct, sumptuous without being gaudy, and practical. Dealing with the quick changes necessary for the actors playing more than one character is challenging, but Khaki-Sadigh pulls off the feat easily.

Wig wunderkind Christine Hackman creates marvelous confections that give these actors not only the delicious look of the period but a starting point for character. All of them are outstanding but the recreation of Louis IV’s wig, as seen in artwork of the time period, is amazing.

The performers and musical direction are no less outstanding than the world the designers created.

All have glorious voices with Greenfield coaching difficult harmonies to great effect. Greenfield plays non-stop without the aid of a band to create the fullness of the music, a fine accomplishment.

Peter Jorgensen’s dashing romantic lead with a wavy wig, thrusts and parry’s his way through making us believe that Mimi’s lust is justified.

Crowd pleaser Greg Armstong-Morris plays the laughs with his sunshiney Italian on death row and especially Torceau, the armless, legless, hungry beggar, gets some serious laughs.

Donald Adams assured performances as Mimi’s father and as detective Desgrais serve the plot well as does Linda Quibell’s maid with her gorgeous belt and clear intentions.

Sanders Whiting’s crybaby fop husband and his Louis XIV both revel in the delight of movement direction taught by period dance expert Catherine Lee. The turned out feet, the extended arms with dropped wrists all create characters that Whiting is clearly having a blast playing.

Jennifer Lines builds the complexity of the murderess and the humourwith a depth and mastery that made we wish I was watching her Dulcinea in Man of La Mancha or Mrs. Lovett in Sweeney Todd.

And therein lies the problem.

Right before his death by pigeon pie, there is a moment, where Whiting’s Brinny drops the fun and we see the truth. There are numerous times in Line’s performance that we see this as well. If the play is to be more than a stylish bit of fun, that dark undercurrent of pathos  is necessary or the audience may yearn for a meatier dish on the table.

Mimi runs till November 20th at the Firehall Arts Centre.