Trudeau Stories reminds us of the former leader's unmatched legacy 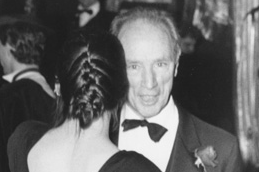 Halfway through watching Brooke Johnson’s Trudeau Stories at Presentation House, I wondered whether such a play could have been written and performed with regard to any other Canadian prime minister. Clark Stories? Chretien Stories? Harper Stories? Or (God help us), Mulroney Stories? No, it wouldn’t work. Only Pierre Trudeau could have inspired such a successful, moving experience.

Brooke Johnson met Trudeau in the 1980s when she was a drama student in Montreal. Their subsequent friendship inspired Trudeau Stories, which she performs as a solo monologue using a minimalist set. Johnson gives a passionate performance, drawing us into her stories about her growing friendship with the enigmatic former prime minister -- 40 years her senior, inviting us to share in her laughter, her fears and her tears.

Johnson conveys Trudeau’s sophistication, his erudition, his intellect, his playfulness and his moodiness. She draws us into her own excitement, anxiety and disbelief that this world player -- just back from meeting with former heads of state in South Africa -- was buying her drinks in a bar called Brandy’s, or asking her for advice on how to rid a lake of beavers.

What’s most effective about Johnson’s writing and performance is the way she captures the nation’s conflicted attitude towards Trudeau.

Ten years after his death, 26 years after he resigned as prime minister, Pierre Elliot Trudeau still exerts a psychological grip on Canada. Love him or loathe him, he incites strong emotions in millions of Canadians. Many articles, essays and books have been written and radio and television documentaries produced to explain our fascination with our former prime minister.

Like many Canadians, I have my Trudeau moments. I remember sitting in front of the television set with my mother, watching him at the Liberal convention where he was elected leader. (After the convention, my mother, a lifelong Liberal, pinned a huge poster of Trudeau to the ceiling above her bed, much to my father’s chagrin).

Other memories: Trudeau speaking to the nation about the Cross-Laporte kidnappings in 1972, Trudeau visiting the Montreal Canadiens dressing room after yet another of their Stanley Cup victories, Trudeau standing on the steps of the hospital in the Christmas Day snow chatting with reporters about the birth of his son (two of his and Margaret’s children were born on Christmas Day!), Trudeau standing by proudly as the Queen signed the Canada Act in 1982, Trudeau coming out of retirement like a prophet striding out of the desert to warn us against the Meech Lake Accord and the Charlottetown Agreement, and many more.

He made us proud to be Canadians. His sophistication, intellect and savoir faire allowed him to stand with other world leaders as equals, raising Canada’s status as he did so. True, some of those leaders -- Richard Nixon and Margaret Thatcher for example -- disliked him, but they took notice of him. Can the same be said for Paul Martin or Stephen Harper?

Yes, Trudeau could be arrogant, stubborn and vain, but his bad points, like his good points, added to his mystique, a mystique that Johnson captures well in Trudeau Stories.

The day after seeing Trudeau Stories I went to Joe Fortes Library to see if they had any books about Trudeau. I wanted to learn more about this complex person who dominated Canadian politics for so many years. In the biography section I found six books about Bill and Hillary Clinton. Two books on Barack Obama. One book about Oprah Winfrey. But Pierre Trudeau? Nothing.