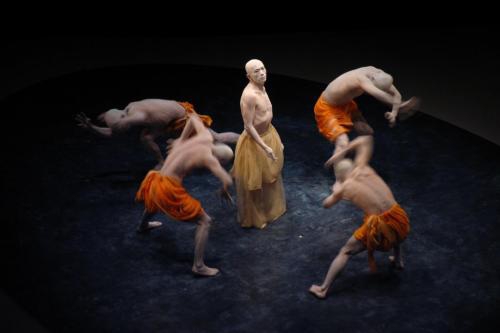 It’s not everyday that famed Butoh company Sankai Juku comes to town. So right off the top, kudos to DanceHouse for bringing this remarkable, internationally renowned company to Vancouver with their work Tobari: As if in an Inexhaustible Flux. After many years of waiting to be in the right city at the right time, what a thrill to finally see this company live. The experience is one I will not soon forget.

The Butoh dance form began with Tatsumi Hijikata in the late 50’s in post- war Japan. Borne from the circumstances of defeat and suffering, Butoh was a specifically Japanese embodiment, set apart from the influences of the Western or more modern world. Commonly in Butoh performance, painted, bald and nearly nude dancers undertake slow, subtle and controlled movements and gestures which illustrate the essence of human emotion and human experience, without narrative.

Founded by second generation Butoh artist Ushio Amagatsu in 1975, Sankai Juku is world famous for its spectacular works which respect Butoh tradition, but also push beyond tradition into new territory.  Through the language of the body, Amagatsu seeks to communicate an abstract vision of the infinite, the relationship of the body to gravity and the relationship of gravity to the earth and the environment.

Amagatsu has named this work Tobari, a Japanese term for a veil of fabric hung in a space as a partition, poetically used to describe the passage from day to night.  And indeed, the piece as a whole explores the idea of time and our sometimes passive relationship to the movement of time. Anything but a conventional dance performance, Tobari is more of an experience, an essence, a collection of feelings; a reality lived and shared by performers and audience alike.

The stage is covered in white sand over which a slightly raised black, oval platform is placed. The platform and the backdrop often light up like a galaxy of stars. The atmosphere is reminiscent of a place in between, in between earth and sky, day and night, here and there, past and present. There is a temporal fluidity and a sense that time is eternal.

Over the 90 minute performance, I feel no less than transported. There are eight male performers, including Ushio Amagatsu himself.  The dancers often move slowly, with incredible muscular control, fluidity and elegance. And suddenly the spell will be broken and they’ll run across the stage, their painted bodies leaving clouds of white powder hanging in the air like a shadow or ghost. Slow sustained movements are countered with tiny, minute gestures of the fingers. Hands are often gnarled, the joints contorted with incredible tension. It is mysterious, hypnotic and strange. The countenance of the performers is most arresting – behind the white paint, their faces reveal the fragility, humility, vulnerability and truth of their humanity.

The company is costumed in exquisitely crafted robes in ivory, blue or orange. Their earlobes are sometimes adorned with dangling globes, or small red berries. During one section Amagatsu dances with redness staining the sides of his face, as if blood is spilling from his ears. It is an unbelievably powerful image of suffering.

At a certain point, I become almost hypnotised. I feel myself drift away, becoming heavy lidded, tucked away in this cocoon of slow movement, darkness and gentle, melodic, achingly beautiful music. Then Ushio Amagatsu dances a solo, and in one moment, I fall out of my reverie. Amagatsu is riveting. It’s as if he reaches out through his movement and connects me with some kind of universal human experience. When the emotion begins to flow through his body, his expression pained, mouth gaping open in a soundless scream with eyes that are wild and primal, my breath is taken away. I feel like I see everything - dignity, truth, horror, fragility, madness, suffering, pain, surrender, acceptance. He isn’t performing at all, he is living the moment.

Tobari is danced with impossible slowness, fluidity and control; this is a testament to how strong these dancers are, in body and in mind. The final ten minutes of the piece are an incredible feat where four dancers lie on the floor in a state of muscular tension with their back, head and legs lifted, like they are floating in water, looking up into the heavens. They continued to dance maintaining this position, never succumbing to gravity or finding release, never falling from this unbearable place. Instead, they increase their muscular tension, eventually manoeuvring their bodies to a standing posture. I have never seen anything like it.

The piece comes to an end with the performers moving towards the starscape, towards infinity. It is a satisfying and beautiful conclusion.  And just when I think it can’t get any better, the curtain call finishes me off. When the lights come up, the company moves very slowly into a bow line, and simply regards the audience, as we have regarded them for the last hour and a half. Absolute humility.  Human to human.  No affectation, no ego. Then, en masse, with Amagatsu in the centre, they take one step backward into a low plié, and subtly incline their heads in acceptance of the thunderous applause and standing ovation. They seem otherworldly yet they are entirely human. Unforgettable.