Stupendously silly "What About Luv?" is rollicking good fun 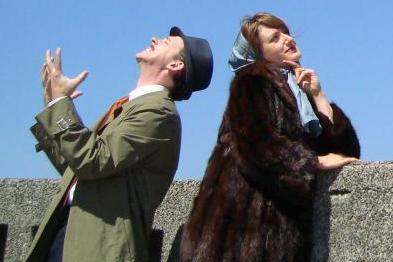 Nel Minor and Meghan Gardiner in Director Mark Carter's What About Luv?

What’s not to like about a musical that makes you turn to your friend and ask, “Did he just sing the words ‘Minute Rice’?” Down Stage Right Productions’ latest fare, What About Luv? running at the Waterfront Theatre at Granville Island until November 13, is a stupendously silly ode to all that we love about musical theatre. With not a weak link in this show, this production picks you up and sends you on your way still chortling.

Based on the movie Luv, starring Jack Lemmon, Peter Falk and Elaine May, directed by Clive Donner which is based on the play LUV by Murray Shishgal, What About Luv? was created in 1984 with Book by Jeffrey Sweet, Music by Howard Marren and Lyrics by Susan Birkeknhead. Originally produced off-Broadway under the title Love, it won Outer Critics Circle prizes for best book and best score and was subsequently revived off-Broadway, in London and Tokyo.

Artistic director and producer of DRP, Mark Carter, directs the three hander with the surety of someone who understands musical theatre so can then send it up with aplomb. With shtick aplenty, Carter guides the actors but is smart enough to let them play. He gets inspired help from Musical Director Sylvia Zaradic, Choreographer Ken Overbey, and three exceptional triple threat actors: Scott Walters, Neil Minor and Meghan Gardiner. 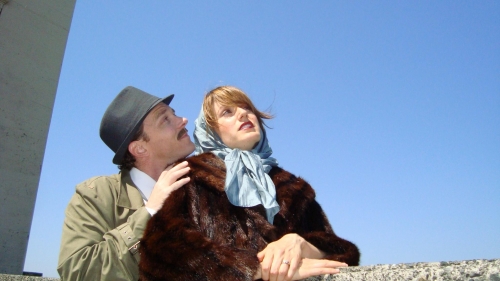 The story of man meets old friend, man falls in love with old friend’s wife so old friend can run off with new love, old friend falls back in love with first wife and visa versa, man questions whether he is gay and loves old friend is enough like the boy meets girl scenario, that we move beyond suspended belief into ‘I can’t wait to see what happens next’ territory.

Played out at the Brooklyn Bridge, where at any point in time someone is trying to kill themselves or murder someone else, in a set perfectly reproduced by set designer John Bessette, even the sound cues from sound designer Andrew Tugwell, get hearty laughs. 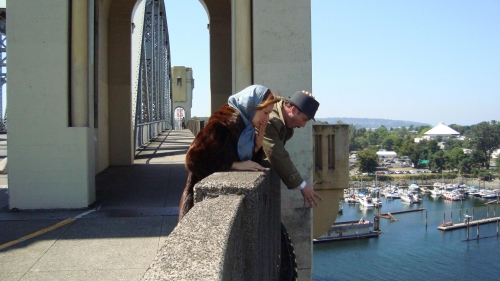 Meghan Gardiner and Neil Minor at the infamous bridge

Walters, playing intellectual schlub Harry Berlin, whose penchant for paper bags strays into serious psychosis from mildly neurotic, is a stellar physical comedian making Harry’s every idiosyncracy truly hilarious. His ode to his paper bag, including the dance break with it over his head, is worthy of Red Skeleton/Jerry Lewis/Jim Carrey excellence.

Gardiner’s  nuanced yet spot–on reactions, Brooklyn accent, and fine timing offers the woman that they both love/hate, Ellen Manville, a reality but, more importantly, a sense of fun that keeps the audience rollicking. Her gorgeous voice, though getting over laryngitis, left the audience assured that every note would soar.

Overbey’s witty and challenging choreography elevated the production as did Zaradic’s musical direction. With lyric’s often absurd, rhymes that surprised and high notes reached for left and right, not only did she realize the potential of the music, she also led the band brilliantlly. 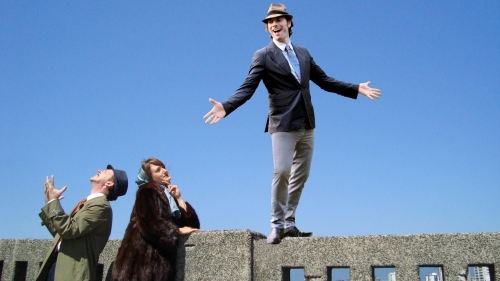