Virtues of Memory: six decades of creativity from Holocaust survivors 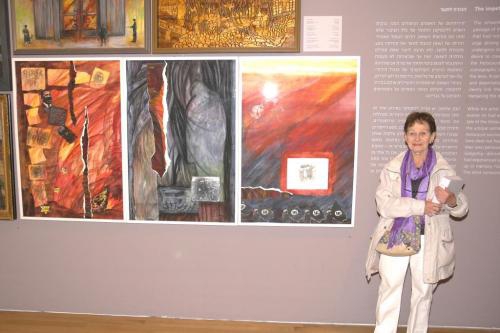 In 1945, at the end of the WWII, the Jewish survivors of  exterminations camps, who then found themselves in DP (displaced persons) camps in Europe, began to draw and paint almost frenetically, wanting to put down on paper not just words, but also images of what they had witnessed. Fearing that their stories about the nightmare landscape they had just left would not be believed, they were compelled to depict in visual form what they had seen.

One of those was Yehouda Bacon, who later became my teacher at the Bezalel Academy of Art in Jerusalem. At age 13 he was sent with his family to the Terezin Ghetto near Prague and then to Auschwitz, where he was charged with transferring corpses and ashes in the creamatoria. He was liberated on May 6, 1945, after the death March to Mauthousen. He immediately began drawing sketches of the crematoria in Auschwitz, later submitted as evidence in the Eichmann Trial in Jerusalem. He went to the Land of Israel in 1946 (before the State of Israel was declared) with the Youth Aliyah (Youth Immigration), studied at the Bezalel Academy of Art in Jerusalem and later taught there. We, his students, knew vaguely about his past, but he never spoke of it and we never asked.

His work in the large scope exhibition ‘Virtues of Memory: Six Decades of Holocaust Survivors Creativity,’ which opened at the Yad Vashem Museum on April 12, 2010, Holocaust Remembrance Day, is dated 1948 and depicts a ‘Muselmann’, as the emaciated inmates of the camps were called. This work is included in the section entitled 'Granting the body an Image – Gaunt of bone, with glassy eyes.'

Another one of my teachers, Jacob Pins, who taught me woodblock prints, is also included in the exhibition. He belongs to the group that managed to leave Europe before the war, but his parents, who stayed behind in Germany, were murdered by the Nazis in Riga Ghetto. Jacob Pins gave me the knowledge that made possible many of the woodblock prints I produced as an artist, some of which are now in collections of Public Galleries and Museums in Canada. He was awarded the Israel Prize for the Arts. His woodblock print in the exhibition is dated 1946.

I am honoured and deeply moved to have my painting ‘Out of the Flames’ included in this exhibition along with my teachers.

The echoes of the Holocaust still reverberate across the decades as seen in the works in 'Virtues of Memory,' stretching over a time span from the end of the war in 1945 and continuing until 2008. Many of the artists have passed away and the others are not young anymore. In the not too distant future none will be left to relate their experiences, but their art will continue to speak loud and clear.

This is the reason that makes "Virtues of Memory" an important and timely exhibition.

Established in 1953 as the world center for documentation, research, education and commemoration of the Holocaust, Yad Vashem safeguards the memory of the past and imparts its meaning for future generations. ‘Virtues of Memory,’ showing the works of three hundred artists, each represented by one piece, is the first exhibition of its kind. All the works are drawn from the Museum’s massive permanent collection of over ten thousand works of art. 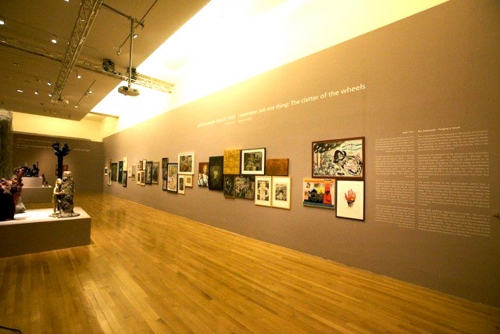 My inclusion in ‘Virtues of Memory’ was the most emotionally fulfilling and important highlight of my career as an artist. I had to be there, to see the works of the other artists and to take part in celebrating this important event, for there is nothing closer to fulfilling the commandment "and thou shall tell it to your children," written in the Passover Haggadah, than this exhibition of artists who survived the Nazi inferno and whose personal testimony in graphic form will last forever.