Bob Rennie in front of Richard Jackson's installation in progress... 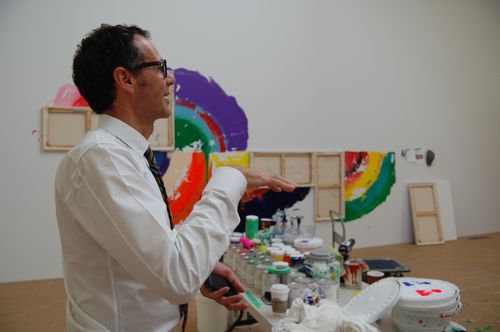 The dynamic sculptural paintings of American artist, Richard Jackson (b. 1939) will be the subject of the second show by Rennie Collection at Wing Sang this spring. Opening May 1 and continuing until September 25, 2010, not only is this the first Canadian exhibition of his work, this will also be the first major exhibition of his work in North America since 1988. Known for his epic site-specific paintings and installations, Jackson will be painting on the walls of the gallery and realizing a number of works for the first time. Following this survey exhibition, Orange County Museum of Art will be hosting a major retrospective of his work in 2012.

Trained as an engineer, Jackson juxtaposes his considerations of labour with the legacy of painting. This takes shape in a variety of unconventional forms. During this survey of Jackson’s canon several works will be revealed and activated for the first time. This includes the installation of 1250 Stacked Paintings (2006-07), a formal testament to human scale, and the rare opportunity to view the entire edition of Glass Head (2006), a combination of glass and paint.  Also actively constructed for and completed within the gallery space for the occasion of this exhibition is Jackson’s large scale re-creation of Georges Seurat’s A Sunday Afternoon on the Island of La Grande Jatte. An ode to his personal interest in hunting, Jackson utilizes a scope and pellet gun in the application of paint, leaving the trace of both paint and action upon the canvas and as debris within the gallery.

Jackson will be exhibiting two major wall paintings, one specifically commissioned for Wing Sang. He began his series of wall paintings in the late 1960s, with most completed during the 1970s, initiating his interest in diminishing the preciousness of the painter’s traditional role and methods. Jackson has been a forerunner in this shift away from traditional painting practices.  By using a canvas to transfer paint to the wall, the canvas rather than the brush now occupies an active role in both the construction and the painting itself. The colourful, expressionist gestures made on the wall are evidence of the pivoted motion of the artist’s performative actions. The front of the canvas is withheld from the viewer, promoting the wall to primary pictorial surface, but still utilizing the canvas in the conversation of painting.

Rennie Collection has evolved over a number of years to focus on works related to identity, social injustice, appropriation, painting and photography. Bob Rennie has garnered an international reputation as a dedicated collector, amassing one of the largest collections of contemporary art in Canada. In 2009 renovations were completed on the oldest building in Vancouver’s Chinatown to display the collection to the public. Rennie Collection at Wing Sang will hold two to three exhibitions a year with supporting catalogues.