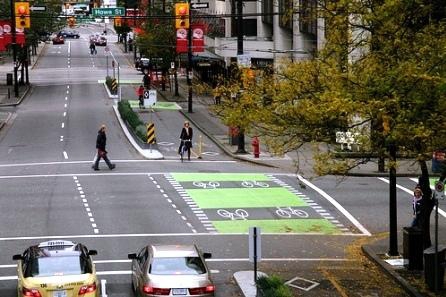 “I’ve noticed there aren’t a lot of people using the downtown bike routes. I worry that they just weren’t a very good idea.”

A well-meaning friend said this to me yesterday. A day later, I have figured out what I should have replied. Better late than never, I guess.

In a nutshell, people are slow to embrace change. In fact, it’s quite fascinating to look back to the advent of motors cars, and see how people resisted cars as fiercely as some people now resist bicycle lanes. Cars were first invented in 1885, but it would be decades before they posed any threat to horses and bicycles. As late as 1907 they were seen as little more than annoying, noisy, smelly nuisances. The editor of the New Glasgow Eastern Chronicle commented:

“The automobile fever is catching.  [Soon] ... the chug-chug noise will be quite common. ... The horsemen need not get alarmed that the motor car will injure their business in our country. “
[New Glasgow Eastern Chronicle, 19 April 1907]

Good thing this fellow was in newspapers, not in the investment advice business. 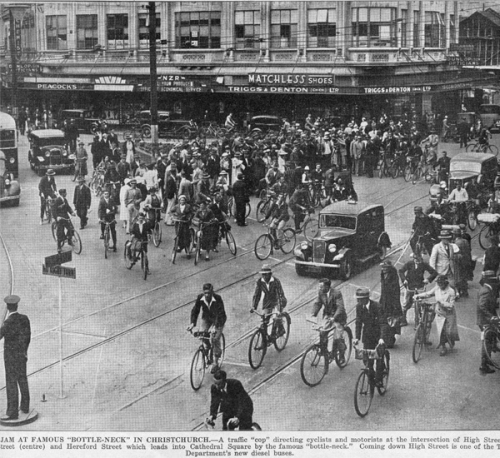 Christchurch New Zealand in the early 20th century:
This photo shows the ongoing struggle for road space, as motorists attempted to wrest control of the roads from people on bikes

As cars slowly became more common, antipathy against them increased – and fear grew. A newspaper correspondent referred to them as the “running stinkers,” saying he was “one who doesn't own an auto – but one who is likely to get run over.” As cars continued to encroach on the roads and fear escalated, moralists came out in force. In just the same way as motorists are now preaching to cyclists, the Chronicle editor cautioned:

“The auto people have the right to use the public roads, but they must do so in a reasonable manner.  If they go rushing about the country regardless of whom they may annoy or injure they can be hauled up with a round turn, but as long as they are careful and regulate to statutory speed their right is undeniable.”

A correspondent chimed in, declaring passionately:

“There surely should be some legislation for the people who maintain the roads and who in their daily avocation are constantly called on to use these roads.  Their rights should be protected against these life endangering pleasure jaunters.”

Unlike today’s unreasonable fear of cyclists, the fear of cars a century ago was very sensible. Their noisy engines and horns on formerly peaceful country roads terrified both horses and humans. One correspondent admitted that he was:

... “(in) mortal terror of one of these devil wagons meeting us when we are driving along the road, our horse taking the nearest fence and leaving us stranded on the roadside, possibly maimed for life, and our good looks considerably out of joint.”

Legislation was bought in to defend the fearful horse-riding majority against the motorized encroachers: 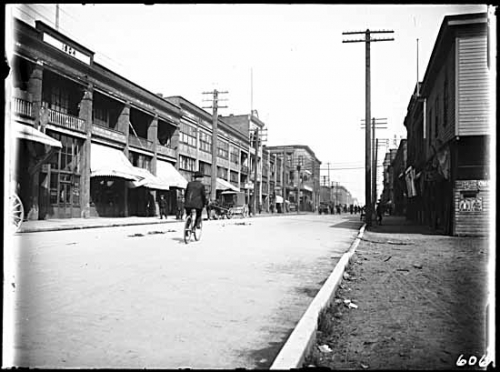 500 Block of Carrall Street, Vancouver, in 1906:
The streets still belonged to cyclists, horses and pedestrians –
but cars were lurking on the horizon, poised to take over
(Vancouver Public Library: Special Collections Historical Photographs)

Exactly as today, business owners were terrified of losing trade because of the newfangled “stink wagons” – also referred to as “gasoline devils” and “devil wagons.” The editor of the New Glasgow wrote: 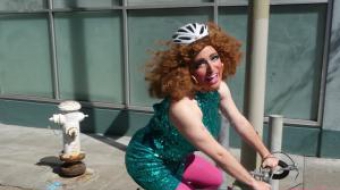 Bike to Work Week returns to Vancouver on Halloween 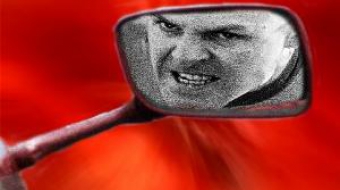 Recently, the news has been full of road rage, but let’s call a spade a spade. Road rage is really just a traffic tantrum (a tantrum in a four-ton vehicle that endangers us all).
Average Joe CyclistFeb 3rd, 2011 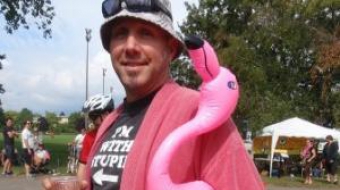 Vancouver’s cycling culture has been accused of being a dull monoculture. Nothing could be further from the truth. Vancouver’s vibrant cycling culture enriches our city’s fabulous diversity.
Average Joe CyclistJan 17th, 2011
Speak up about this article on Facebook or Twitter. Do this by liking Vancouver Observer on Facebook or following us @Vanobserver on Twitter. We'd love to hear from you.