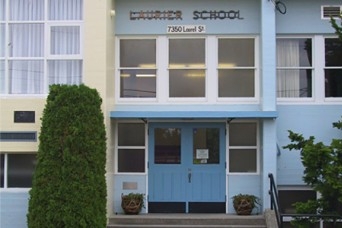 Laurier Elementary is only one of a number of schools that Jim Duggan has helped.

Around three years ago, Laurier Elementary got a call from a concerned community member. Laurier principal Janet Souther remembers the day distinctively. Expecting a concern, she remembers being pleasantly surprised by Jim Duggan's offer to help the school.

Duggan, who lived in the neighbourhood, but had no children enrolled at the VSB, said he had an extra recording system because he used to work in the music business. He asked if the school could use it.

"To be honest, he seemed to be a little too good to be true," says Souther.

The media recording system donation was just the beginning. Over the next three years, the school would greatly benefit from Duggan's generosity. Over the years, Souther says she recieved all sorts of help from Duggan who was never shy in purchasing everything from Oxford Reading Trees to handballs for the school's handball team. When the school was in desperate need of new choir risers, it was Duggan who stepped in to fill the void purchasing new risers for a steal of a deal.

Over the years, Duggan has become a regular visitor to the little school. He'll purchase coffee and lunches for staff members and has been key in setting up the school's student assistance program as well as helping Laurier with fundraising to support their sister school called Olinda in Brazil.

"His generosity has been incredible," says Souther. "He's just given so much to Vancouver schools."

Recently, Duggan has transitioned to help other schools, many in the Downtown Eastside, through the ongoing donation of truckloads of fresh vegetables thanks to the help of his friend Jason Yang, the owner of Neighbours Choice Farm Market. Yang's generosity matches Duggan. Together the two donate 700 lbs of fresh vegetables and produce each month to four VSB inner city schools.

Duggan says the support of inner city schools strikes a deep chord for him, having spent a few months hungry when he was a child.

"That was just one bad month in one bad year and I still feel the impact today," says Duggan. "Many of these kids struggle with poverty and are hungry much of their young lives."

Duggan says this is what keeps him going and makes him so passionate about helping Vancouver students.

"I do my best, I talk to people and advocate for them," he says. "I want to let them know they aren't alone and I am there to help them."

Playground Builders bring joy to the world, one swing at a time

Tupper Tech Takes Trades Training to the Next Level