Does religion have a place in schools? Revisiting the Jesus T-shirt school controversy 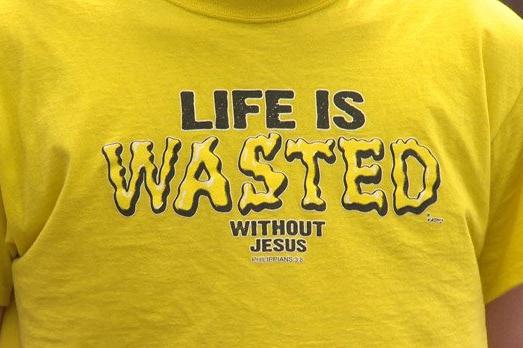 The recent controversy over a high school student's Jesus T-shirt has many Canadians wondering: what place does religion have in schools?

Jason Carreiro, a local writer and PhD candidate in Philosophy of Education at Simon Fraser University, believes religious expression of all kinds should be accepted in schools across the country.

"No matter what form or manifestation, religious faith should be respected and celebrated, no matter if in a private or a public school," Carreiro said.

"The way secular education is designed incites hatred and division ... we should merely accept the mystery that we are all on the same planet, sharing the environment, and just live in peace with all our differences."

He said that in the right learning environment, religious people and atheists could talk about their different perspectives while learning from each other's beliefs.

“I also think that if a teenager was wearing a light green T-shirt, for example, saying, ‘There's probably no God, so don't worry and go live’, (that) would be okay,” Carreiro said.

The limits of freedom of expression and religion

Most education experts are concerned with the boundaries between religious tolerance and freedom of expression: why would a Christian T-shirt be so problematic while students of other faiths -- Muslim, Jewish, Buddhist -- are allowed to wear symbols of their own religion in class?

The Jesus T-shirt controversy represents the challenge of protecting freedom of expression in a country as culturally diverse as Canada, according to Eva Sajoo, a research associate at the SFU Centre for the Comparative Study of Muslim Societies and Cultures.

"In Canada, we generally have tended to take the view that expressions of personal belief are protected, but expressions which threaten or coerce others may not be," she said.

“We have laws on 'hate speech', for example, which would prohibit wearing a T-shirt with a Nazi symbol, or a slogan like, 'Gays will burn in hell'.

"These laws are intended to protect vulnerable groups from hostility, which encourages violence."

Sajoo doesn't see much problem with the Jesus T-shirt itself -- which read, "Life is wasted witout Jesus" -- but more the way in which it was being worn. According to the CBC, he was wearing the T-shirt for weeks to make a point, and was telling other students they would "burn in hell" if they didn't adopt Christianity. When the school asked him to remove the shirt, he refused.

Such behavior, Sajoo said, is "problematic" because it "may create a toxic environment in which others feel defensive or withdrawn."

Carreiro agrees. While he feels Swinimer's T-shirt itself presented a "nice message", he said the problem was the way the student was imposing his views on non-Christian peers.

"In that specific case, the student acted incorrectly, because the school was hosting discussions about freedom of expression and religious tolerance," he said. "It would have been OK if he wore the shirt and participated in the conversation politely...but according to most news sources, he was proselytizing, preaching and being disrespectful towards other people's beliefs."

In some past cases, the "religious freedom" argument has prevailed in court, such as the 2006 case of a teenage boy wearing a small traditional Sikh sword to school in Montreal.

The Supreme Court of Canada ruled in favour of the Sikh faith after a school board banned wearing of the kirpan -- a ceremonial small sword worn by orthodox Sikhs -- in class. The court concluded that the total ban infringed on religious freedoms and violated the Canadian Charter of Rights and Freedoms.

But some Christians feel attacked appealing that the freedom of expression has a double standard with Christianity over other religions. John Swinimer, the student’s father, was outraged by his son's suspension and accused the school and the province of being "anti-Christian". He added that his children have been bullied at the school because of their beliefs.

To Sajoo, however, Swinimer’s case differs fundamentally from other religious garments like the hijab (an Islamic headscarf). For example, if a girl wears the hijab to school, she is simply signaling that she is a Muslim: she is not demanding others to convert to Islam, as he did.

Religion freedom in the public space -- especially for Canada's increasingly diverse schools -- comes with the need for a fine balance. On the one hand, students need to be free to express religious beliefs, but on the other hand, they need to do so in a considerate way that doesn't negate other people's faith (or lack thereof).

“In a public space, some moderation of expression is required out of respect for others,” Sajoo said.