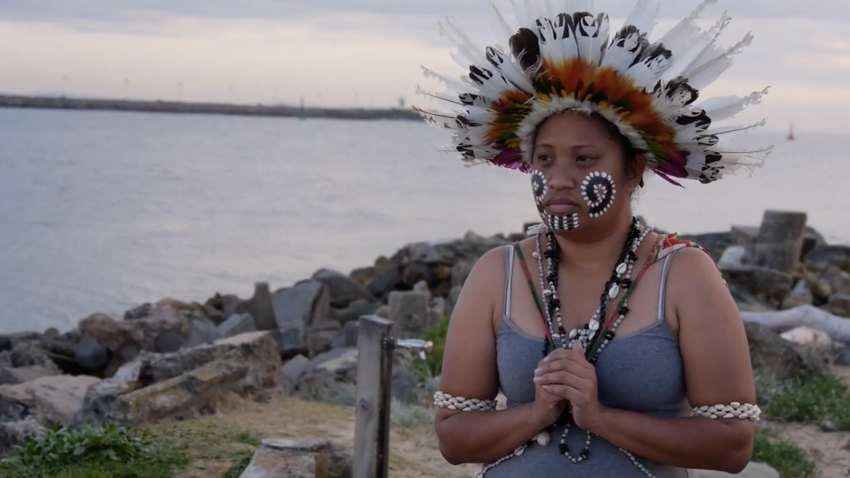 Image: Screenshot from How to Let Go of the World.

So what happens when one refuses to look away?

That’s the challenge taken on by filmmaker Josh Fox in his new film, How to Let Go of the World and Love All the Things Climate Can’t Change.

Like its title, the film is a long and artful look at an almost too-familiar topic, but one that takes you to unexpected places.

Fox, celebrated for his award-winning documentary GASLAND that charted the impacts of prolific fracking in the U.S., including near his home in the Delaware river basin, begins How to Let Go of the World by celebrating a local success against the gas industry in Pennsylvania.

But his celebration, which is marked by some impressive dad dancing, is cut short by the realization that a beloved family tree has been overtaken by woolly adelgids, an insect infestation prompted by the warmer winters of climate change.

Josh Fox will attend a film benefit screening of How to Let Go of the World in Vancouver on May 23, 2016. Tickets and event details available on Facebook or through the Rio Theatre. The event is hosted by DeSmog Canada, Gen Why Media and the Rio Theatre. All filmmaker proceeds will go to the Athabasca Chipewyan First Nation Fort McMurray Fire Relief Fund. Event is 19+.

Fox then casts his gaze out to other impacts of a hotter climate, including the devastation wrought in New York and New Jersey by Hurricane Sandy.

Trailer: HOW TO LET GO OF THE WORLD AND LOVE ALL THE THINGS CLIMATE CAN'T CHANGE from JFOX on Vimeo.

The film channels Fox’s deep sense of personal despair and the social-political languor that such feelings give rise to.

But it is here at this low point, Fox’s intuitive filmmaking takes flight, bringing us into an alternate world of hope, dance, creativity, resilience and on-the-ground storytelling that drives the remainder of the film’s narrative.

“The moment you surrender, I really think that’s the moment, when you change,” Fox says in a narrative voiceover. “But that’s also the moment you find the revolution inside.”

“What are the things climate change can’t destroy?”

Seeking out places where the battle is being waged against climate change, Fox travels to the jungles of the Amazon, to Ecuador, Samoa, and Zambia, all in search of the meaningful human experience that thrives despite the fight.

On a trip to China, Fox interviews climate activist and energy democracy advocate Emma Chou who says society has lacked the “moral imagination” necessary to surmount the obstacles to clean energy and a stable climate.

“The moral imagination allows us to think outside of this box, having a moral value of what you want as a person as an individual. What do you want out of our own humanity?” Chou says.

The conversation proves to be a major turning point for Fox, who realizes his personal climate despair is an inadequate response to the global challenge at hand.

“I felt ashamed that I ever wanted to sit at home and do nothing….so stupid to think that way, it’s just not possible. What’s required is so much more.”

“If there was any idea that could rocket you off to the stratosphere, [the moral imagination] is it,” he says.

“The moral imagination designed and built the first solar panels, wind turbines, and geothermal power plants…the basic truth that renewable energy can provide 100 per cent of the power needed on this planet.”

“There’s no end to human innovation once the moral imagination is evoked.”