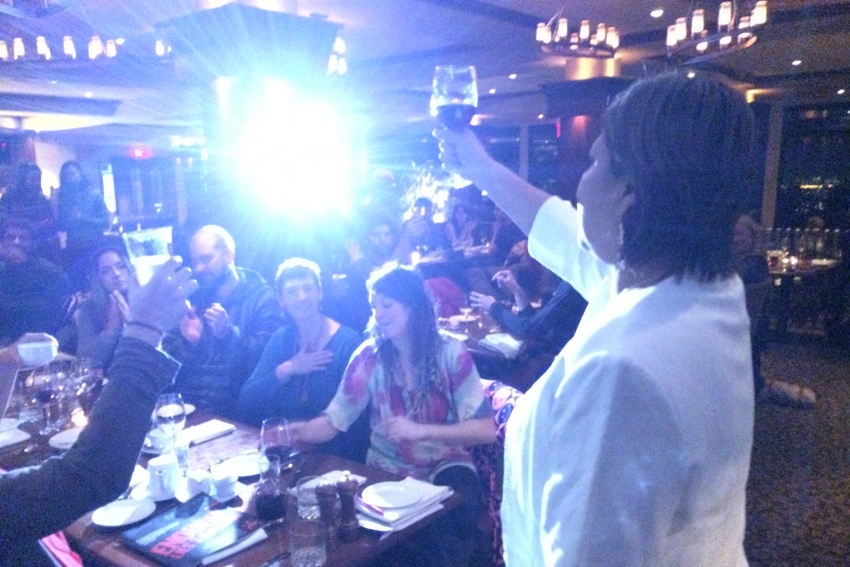 Della Glendenning, a 74-year-old grandmother arrested during the Burnaby Mountain Kinder Morgan protests, was there at a table as children chased each other around the restaurant.  Kennedy Stewart, MP for Burnaby-Douglas, conversed with people who had been holding vigil on Burnaby Mountain for months. Sut-lut, the Sḵwx̱ú7mesh elder who lit the sacred fire at the main protest camp, was seated at a table with veterans of the Clayoquot Sound protests. Horizons staff swooped around taking orders and serving dishes — a reminder of why the dinner had been organized.

According to the event's organizer, Valerie Langer, the dinner at Horizons was called so "our community at large can help them recuperate, given that they were directly affected by Kinder Morgan." The business was forced to close and lay off 60 employees during the time the company was on the mountain doing testing for its pipeline expansion project.

Diane Summers, the senior manager at Horizons Restaurant said it was "nice to have some customers back in the restaurant" and that she was just "glad to be open again."

Langer said Burnaby Mountain protests had been "about community acting together" and that it was in this "spirit of community" that activists were here tonight so that Horizons would feel supported and "would have this feeling and understanding that we stand with them, for the mountain, for the land."

"Make sure that you tip well, because their staff have not had ten days of work because of the altercations," she said, to appreciative laughs.

She concluded, "I think for today, we can say that the skirmish has been won, but there is a battle ahead still, and that we are very, very ready to go forward."

Sut-lut, the Sḵwx̱ú7mesh elder who Karen Mahon, one of a group of former Clayoquot Sound leaders, who was arrested earlier this week, described as being "at the very heart of this whole time on the mountain and this struggle." Sut-lut offered  "just a few words about the sacred fire."

"Each of you — I've had time with you there, that's how we connected. That's how we became a colourful family. I told the police, you cannot keep the people from the fire."

Sut-lut's conviction that "we made a community here" was echoed by Aedan Mahon, the son of Karen Mahon. Both have been a constant presence on the mountain during the recent protests. "This is one small battle of many," Aedan said, "but look at what a massive win this was for the side of the people."

Earlier in the day, a large crowd came up to celebrate the departure of Kinder Morgan workers from Burnaby Mountain, after a Supreme Court ruling on Friday that rejected the company's bid for an extended injunction and dismissed contempt charges for over 100 people arrested for crossing the police line.

Rueben George, an outspoken critic from the Tsleil Waututh First Nation of Kinder Morgan's pipeline expansion for the past few years, said the recent court decision was one significant win in the long fight against the project.

"I'm definitely sleeping better these days," he said. "Before, there were days when we weren't getting much sleep at all.

He said there were times when the Kinder Morgan expansion seemed like a 'done deal', but that regardless of how things unfold from today, his Nation's stance on the project will remain the same.

"We, the Tsleil-Waututh council, voted unanimously against this project when it first came up, and our feelings about this hasn't changed," he said.

SFU molecular biology department chair Lynne Quarmby, who herself was arrested during the protests and has become a public face of citizen opposition to the project, urged people to help each other in resisting the pipeline expansion.

"It’s been a long, long stretch demanding a lot of energy from people," she said.

"This battle’s been going on for a long time but the last two months have been really intense. There have been emotionally challenging times when we’re not getting enough sleep, and everyone being cold and tired, and lots of different views about how to proceed. One of the greatest accomplishments has been that we’ve come together and made it through, together. We need to remember we are all headed in the same direction...with shared values. Together, we're going to make our new world."