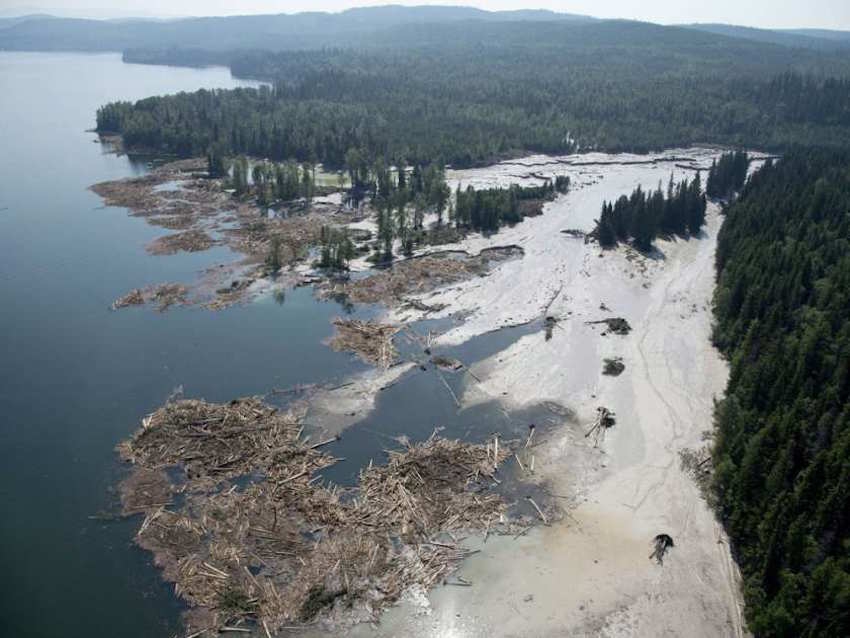 Protestors from Alaska are trying to stop another Imperial Metals copper mine in northern BC, fearing increased pollution of the headwaters of key salmon rivers that flow from Canada into Alaska. Photo by The Canadian Press.

A delegation from Alaska says it is time to enforce the century−old Boundary Waters Treaty between Canada and the United States when it comes to northern British Columbia mining activity.

The group is in Ottawa this week seeking to enlist federal help in stopping B.C. copper and gold mines from polluting the headwaters of key salmon rivers that flow from Canada into Alaska.

They’re also pushing the U.S. State Department to refer the matter to the International Joint Commission, which was created under the 1909 Boundary Waters Treaty to help resolve disputes along internationally shared waters.

Frederick Otilius Olsen, an indigenous tribal vice−president from Kasaan, Alaska, says the catastrophic failure of the Mount Polley mine tailings dam in 2014 was a "huge wake−up call" that galvanized concerns over what he sees as British Columbia’s lax mining regulations.

Olsen heads an organization of 15 federally recognized tribes in southeast Alaska who have banded together to demand a say in resource decisions that affect their lives, and to reach out to B.C. First Nations in the common cause of saving the environment.

The Alaska group is meeting members of Parliament in Ottawa and has a sit−down on Friday with Bruce Heyman, the U.S. ambassador to Canada, but won’t meet Prime Minister Justin Trudeau — who just happens to be in Burnaby today to meet with B.C. Premier Christy Clark.

The group said it has arranged a meeting with officials at Global Affairs Canada. The department did not immediately respond to a request for comment.

Heather Hardcastle of Juneau−based group Salmon Beyond Borders says the group is "still incredulous" that B.C. has permitted another, larger open pit copper and gold mine to be opened by Imperial Metals, the same company that owns the Mount Polley mine, using much the same technology.

Last month, British Columbia’s auditor general issued a damning "Audit of Compliance and Enforcement in the Mining Sector" that found "almost all of the expectations for a robust compliance and enforcement program were not met."

A spokesman for B.C. Energy and Mines could not immediately be reached for comment.

Hardcastle said there are at least 10 metals mines on the drawing board in B.C. that could impact three key, transboundary salmon rivers: the Taku, Stikine and Unuk. United States federal non−development designations protect the American sides of these rivers due to their economic and cultural importance.

"We’re not opposed outright to mines," said Hardcastle, whose family runs Taku River Reds, which sells salmon across the U.S.

"What we’re advocating for, at the very least, is a seat at the table for the U.S. and for tribal and indigenous governments, with Canada, to decide what we want these shared rivers to look like generations from now."

The group visited officials in Washington right after Trudeau’s state visit in March, and said they found some "very passionate folks" at federal agencies with a sympathetic ear.

Jill Weitz, the campaign manager, said officials told her that proposed language on the "Alaska−British Columbia transboundary region" was kept out of the joint statement on Arctic Leadership, Energy and Climate Change signed by President Barack Obama and Trudeau.

The group was told they needed to get to Ottawa directly, and now they have been given a meeting with the U.S. ambassador that they’d been seeking for the past two years.