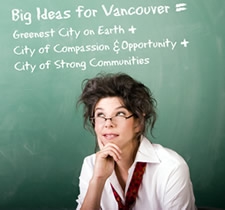 “I spent most of my adolescence trying to kill my IQ with drugs and alcohol.”Andrea Reimer laughs. She holds up a hand, as if to say, “I give up.”

Some estimate that Einstein, it might be noted, possessed an IQ of 160. “It’s a blessing and a curse,” Andrea says.

When asked what the curse is, she squints. Her look seems to ask: “Are you blind?”

“I’m kind of a freak. I go to a party. People are just hanging out and socializing and then I come in and over-intellectualize things. The blessing is that I can sit on eight boards, run a large organization, raise a daughter, play soccer, and run for office.”

Andrea, the executive director of the Wilderness Committee and a former Vancouver school board trustee, announced her intention to seek a Vision Vancouver nomination for city council in July. She hasn’t been over-intellectualizing her desire to work towards change through municipal government. She’s been reaching out across a broad spectrum of Vancouver, drawing on her background as a street person, an elected official, a leading environmentalist, and a mom, to pull in support.

At 36, she appeals to young people who would like to see government be more inclusive. “I am part of the leadership of a new generation that sees the world not as an ‘us’ and a ‘them,’ but as a big ‘us’ that needs to work together to find solutions.”

Andrea lives on the edge. She’s always been there, and it’s easy to guess that she always will be. “When other candidates ask for my support,” she says, “I make sure they know about my past so it doesn’t catch them by surprise later.”

Born in Saskatoon, Andrea was put into foster care as a baby and knows little about her biological parents. At eight months, she was adopted by a Vancouver couple. They settled in Calgary by the time Andrea started school.

Both parents came from abusive backgrounds. Her father was raised in a Mennonite community in Manitoba. He grew up in poverty so dire there was often nothing to eat. He was “beaten, doused with water, and tied up outside, just because that was how his parents thought you had to learn the right way to do things.” Her mother’s father was an alcoholic and used to “beat the crap out of my grandmother and my mom.” Her maternal grandmother, who has been a source of inspiration for Andrea, finally took the kids and moved to Vancouver.

“My grandmother was a fatalist. She had a belief that things happen because they happen, and you can control how you react to a thing, but you can’t control the thing.”

Her parents taught her to work hard at a young age. By the age of three, she had to do the dishes. She was making dinner at the age of five. She had five hours of chores to do each Saturday. “I dusted the whole house, vacuumed, laundered towels, cleaned the bathrooms and the kitchen. Every four weeks, on top of that, my brother and I had to polish silver and clean the chandelier.... Then I could leave the house.”

“I’ve never known anyone who works quite as hard, and is always the first to volunteer to take on yet another task,” says Karen Mahon, executive director of Hollyhock Leadership Institute, about Andrea. Karen laboured alongside Andrea in the environmental movement when the former worked for Greenpeace.

As she neared her teens, Andrea grew rebellious. “My mom used to hit me. When I was about 11, I grabbed a brush and hit her in the face. I didn’t think it through. It was a defensive reaction. And she never touched me again. I think what she realized in that moment was that trying to control me wasn’t going to work. I wondered why I hadn’t done it before.”

She took her first drink and smoked cigarettes at 10. At 11, she tried drugs like hash oil and mushrooms. “I was probably 12 when I did my first acid trip. I was mature for my age and had a good mind.”

She also began drifting towards the streets. It was the first time in her life she felt connected to something. “There was a culture of people who looked after each other. They liked new ideas. They talked about things. They were politically engaged.” After a few months, she stopped going home altogether.