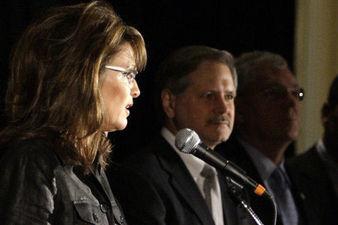 T'was the season when Americans dreamed of moving to Canada. I was chatting about politics in the Cannon Beach, Oregon post office on the eve of this year’s vote. A friend shared a comment from a Republican relative in Texas: He said if Obama won he was leaving the country. When asked where he’d go, he declared, "Vancouver, B.C."

Americans cling to Canada as a symbol of political asylum. We stash that notion in a little box and take it out when we’re upset with our government. The habit distracts citizens from having a deeper dialogue with friends across the world’s longest unguarded border.

Cross-border conversations were a balm to me during the storm of this season’s elections. Canadians offered a welcome boost to business at my bookstore, plus they shared vital insights on the state of the nations.

Rick the teacher from Victoria made two arresting observations after traveling around the states for seven weeks. “I’ve been amazed at the number of people I’ve seen who have ruined teeth or no teeth at all,” he said. “I’ve also been surprised by how many homeless people I’ve seen in American campgrounds.”

Evidently Rick’s homeland has resisted the steep slide toward economic decay. Although dentistry is not included in Canada’s national health policy, Rick suggested that the policy puts Canadians in a better position to cover the costs of such basic needs.*

With regards to housing, tighter regulation of money-lenders in Canada has curtailed the foreclosure crisis that America is experiencing. I discussed the topic with Rob and Bev, a couple who sell real estate in Port Coquitlam. We agreed that if President Bush had governed in a manner similar to that of Prime Minister Harper, President Obama would not be faced with this royal mess. I asked Rob if he ever worries that Canada might fall into the same hole that’s been dug here.

“There’s no way that could happen,” averred the Brit-born realtor who calls himself a “mish-mash Liberal.” He said Canada does not face that political risk because his country does not vest any individual with such power.

“In America you’re electing a king, every four years,” said Rob. “These men go from being Mr. McCain or Mr. Obama to being Mr. President. Then people start falling down in the streets to touch the hem of Mr. President’s robe.”

Rob’s critique of Yankee monarchy squares with an essay I read last June in Harper’s Magazine. In his article “Democracy and deference,” Mark Slouka draws readers toward an undeniable truth by way of a simple comparison:

“Consider, for starters, the unavoidable (if largely symbolic) fact that our president lives ensconced in a palace, while 10 Downing Street is a row house. From there, consider the regal arrogance of the president and the president’s men: their refusal to justify or explain policy, or abide by the Constitution, or respond to the concerns of Congress. Next, consider the spectacle presented by the president’s “meetings with the people,” when he deigns to have them. Consider the extent to which he is scripted, buffered, coddled; the extent to which his audiences are screened to assure that they consist of cheerleaders whose “questions” are nothing more than praise couched in the shape of a question...”

Slouka suggests that citizens of the Commonwealth have not grafted kingship onto the office of prime minister because they already have a royal family. The base human desire to crown national identity is lavished on those who do all the symbolic things that royalty should do, and nothing more. By extension, Canada’s prime minister is charged with managing the country’s business, not serving as the incarnation of power.

All the Canadians in my shop were cheering for Obama, and some thanked me for displaying his sign in my front window. Will our beloved new king honor his word and bring change to the office of president?

In his victory speech, Obama made reference to the motto “E pluribus unum” that appears on America’s coinage. There are different ways to interpret those Latin words -- “Out of Many, One.” They remind me of an oath popularized by Alexander Dumas in his classic adventure story.

“All for One and One for All,” avowed my 9-year-old daughter Roan on the weekend before Election Day. She was a musketeer for Halloween; our household jousted over sugar. We also rented Disney’s 1993 version of Dumas’ classic and watched the king’s blue-cloaked heroes defeat the Cardinal’s red guards. The blue anti-meanies swore to protect the crowned head – hence the motto. The king was their one.

I thought of that clash of colors several days later as we watched the final hours of America’s crowning blood sport. The electoral map provided Roan with a useful visual aid in understanding the battleground. America conquered by color, state by state. I understand that in Canada the affiliations are reversed, with blue Conservatives fencing against red Liberals. It appears the provinces abide by more civil rules.

Obama’s victory prompted a colorful blog from a bloke in India:

“If Barrack Obama is the face of change in the United States of America, the winds of change are already sweeping the entire nation. To start with, Obama has stormed many red republican bastions and painted them with democrats’ blue. And, it is not the colour red or blue anymore…it is purple.”

Purple as in royalty? Goodness, no. If America hopes to raise the bar on democracy, we will end the presidential monarchy. We will make sure that our government stops torturing prisoners, stops tossing folks into dungeons without due process, stops raiding the health and welfare of the citizenry.

It will take a cross-border coalition of willing hearts and minds to bring the false kingdom to an end. We will need to show PM Steve and P Barry how to deepen the dialogue. Become close colleagues in the quest for good governance. Canada is not just an emblem but a partner in America’s expatriation from tyranny.

* I would like to hear from our editor’s dental hygienist on this topic. In the course of writing this column I realized that Linda Solomon’s article about Halloween candy offers important insights on governance.

Watt Childress lives on the Oregon coast and writes columns for the Cannon Beach Citizen. Stop by and visit him at Jupiter’s Rare & Used Books, or email him at Jupiter,,,pacifier.com.

Photo above: Palin speaks at Governor's conference in Florida. Might she come to Canada, too?

How I cured my kids' post Halloween candy addiction