BC Gets Rich "Again", as Energy Co's Buy Exploration Rights 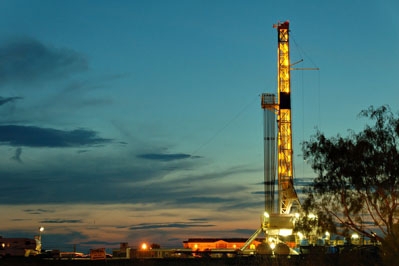 Reporter David Ebner writes in The Globe and Mail that the BC (and Saskatchewan) boom "is very much like what happened in Alberta in 2006, when the province took in an astounding $3.43 billion with more than half coming from the sale of exploration rights in the oil sands."

All the best land has been claimed in Alberta. So corporations have turned to British Columbia to continue expanding.

"For natural gas, B.C. is where every big and small energy company wants to be," Ebner writes.

He goes on to explain that natural gas and oil in B.C. is trapped in "barely porous rock formations", which means it has been nearly impossible to get at them until recent advances "in drilling techniques and what is called multistage fracturing-where millions of litres of fluid is pumped at high pressure down a well bore and along a multikilometre horizontal leg, creating multiple explosions in the geology at set points to get gas or oil to come shooting to the surface."

The bust of a marijuana grower on the Sunshine Coast and the seizure of his $600,000 mortgage free home made the headline on The Vancouver Sun website today. The Sun also reported on the huge increase of gas and oil exploration in BC in its business section.

"The machinery of energy exploration and extraction acquires a mind of its own," investigative reporter William Marsden writes in his book, Stupid to the Last Drop which details stories of Alberta ranchers and their difficulties with gas and oil exploration that occurred on their land.

"Once it's up and running, it's almost impossible to shut off. Every step demands more money, and with that comes a heightened urgency to recoup mounting investments. Stress levels rise. You're not digging for oil or gas, you're digging for money,"
Marsden writes.

The Vancouver Sun reports that most of the gas drillers secured land positions in the Western Horn River basin in B.C.'s far northeast. "Exploration companies paid $321.4 million for six drilling licenses in the basin, some 80 kilometers north of Fort Nelson."

Drillers are "beating a path" to the Western Horn River basin, the article by Derrick Penner with files from Canwest News Service, goes on to say.

"B.C's production, unlike Alberta, is going to be growing at a good pace of the next few years," Mike Graham, an executive vice president at Calgary-based EnCana told the Globe and Mail. "It's big. It's big for EnCana. And it's big for B.C."

Photo above of natural gas drill