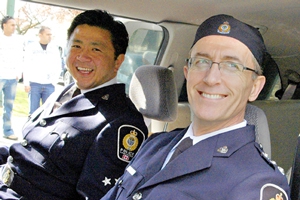 Vancouver Chief of Police Jim Chu (left) rode down Ross Street on his way to the Sikh temple Saturday afternoon in the Vaisakhi parade, part of the worldwide festival that commemorates the birth of the Sikh religion.

"I'm the one you want a picture of," Chu said, when Vancouver Observer photographer Brian Powell asked if there was a dignitary in the van.

Organizers said over 100,000 people from Vancouver Island, Surrey, and the United States joined the local Sikh community in this important festival with its spectacular parade that took over Main from 49th and went south on 57th.

"Giving away food is a fundamental part of the Sikh religion," a bystander explained, motioning around to the many stalls offering free and delicious Indian dishes and heavenly urns of chai. More photos coming soon.